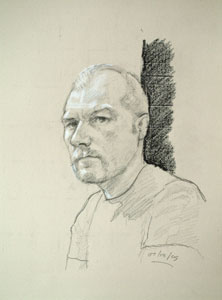 Third in the series – a self portrait a day until Christmas.

I made a new, bigger grid last night, A3 size, before I did this one, which is why there’s more of the figure in it. On the portrait on 6th December,I couldn’t get the neck in because the frame of the grid was blocking it. Thus the bigger grid.

Although I started out using the grid on this drawing, once I had a few anchor points in and the rough shape of the head laid out I pretty much ignored it. It’s easy enough to do by simply opening both eyes and focusing on the subject. Using the grid requires you to keep one eye closed most of the time, so obviously you can’t use it anyway when it comes to the eyes.

I really struggled with this one. This was my third attempt. For the first one, I tried to concentrate on flat patterns and produce a drawing of tonal shapes. It went badly wrong, I tore it up. Second attempt I roughed in a couple of points and a wave of tiredness hit me, I had to getaway from the easel for a bit. Maybe doing portraits at 2 in the morning isn’t such a good idea.One cuppa later and I started in on this one.

After a few minutes I seemed to relax into it and the drawing didn’t come out too bad I guess.Except it doesn’t look at all like me. Not much of a change or improvement on the last two days either.
A Self Portrait a Day