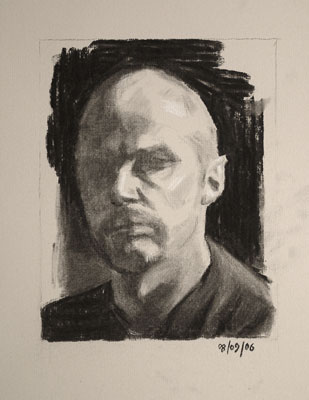 This self portrait is just a sketch.

That said, It took about three hours, about as long as it would usuallytake me just to lay a drawing like this out in line, if I was being careful about it. For this drawing, I wasless concerned with getting everything in the right place, and much more concerned with tone, the lightsand darks.

This is something I’ve been working on over the last fortnight with my series of100 still life drawings, of whichI’ve now done twenty-one (counting today’s drawing of two shells.) I’ve stoppedpainting completely for the time being, whilst I try to get to the bottom of my problems with tone.Gradually, througha process of trial and error and the advice of Mr. Steven Sweeny, I’ve arrived at an approach which worksfor me.

It’s been troubling me for some time that I don’t have a tonal range as wide as what I see in natureavailable to me. I can generally get as dark as I want, but not as light as I want. Paper, or paint, onlyreflects a certain amount of light, and there are many, many objects in nature which reflect significantly morelight. That means that the intensity of the highlights in nature generally can’t be matched in either a drawingor a painting.

The answer to this problem, or at least one answer which seems to work for me, is really fairly simple.It’s taken me a long time to get to this point, but the basic approach is to establish the darkest dark andthe lightest light on the drawing straight away. You then have the two extremes of your available tonal rangeright in front of you, and you can relate every other tone to those. As long as you preserve the generalratios between the tones in your drawing, the forms will live and the light will appear convincingand clear. Now this is something I’ve come across in books on painting before, I believe I’ve tried it beforetoo on the odd early still life painting, but it seems I had, as usual, to make myself jump through multiplehoops before I was convinced that it was right. I had to get it wrong a lot of times first.

For this drawing, the darkest dark, which went on first, was my right shoulder in shadow, on the left asyou look at the drawing. That one is matched by the shadows of the folds on the jumper on the right, andthe background on the right, up around my head and over to the top left of the drawing.Once I’d laid out the rough position of the shapes, theseparts went in first, roughly and quickly with a big chunk of scene painter’s charcoal.

Next stage was the highlights on the forehead, the nose and the cheek bone on the right. The drawing didn’tlook like much at this stage, but I had my tonal range established.

Next, I put in the biggest tone block, down my face and neck on the left. That also included the shape roundthe eye on the right, and a little bit on the ear. This part was done in quite painstaking fashion, with a seriesof horizontal parallel lines which were then smoothed in with a stomp. Already at this stage I could startto see the form emerging. After some softening of the transitions to the blank paper at the edge of that maintone block, I darkened the shape around the jaw on the left, and modulated the big tone block here and there bytaking some out with a putty rubber. Some detail was put into the light area on the right with what charcoalwas left on the stomp, just rubbed into the surface. All this stage was a kind of push and pull, darkening andlightening here and there until more of the smaller forms started to appear out of the big shadows.

I didn’t spend a great deal of time at this stage, and although I could have continued refining the shapesand tones and added a lot more detail, I wasn’t looking or a finished drawing here. I really just wanted to seeif the way I’d been approaching the small still life drawings was going to work on a portrait.

For my money, it does. If I contrast this drawing with mylast self portrait, it’s verynoticeable how much stronger this one is, in terms of tone. The last one looks hesitant in comparison,although of course it has more detail.

I don’t want to push this any further with the portraits for now. I don’t want to run before I can walk.I’ve been doing that a lot, ever since I started painting and drawing again, and falling over repeatedly hasshown me that it’s not a good idea. For the time being, I plan to do future portrait drawings like this one,without too much detail, concentrating on the main tone blocks. I will be more careful about the layingout though, since the likeness is could have been much better on this one since the drawing out stage was donequickly. I could have been a lot more assiduous about the detailing and relationships between the tones too.

But today, for this drawing, I’m happy. As far as I’m concerned, I’ve proved to myself that this is agood way to approachlaying out the tones in a drawing, establishing the form and the light, regardless of whether I’m drawing apiece of fruit or my own face. The process is the same. Although it may not look it, I think this self portraitis a big step forward. Now I need a lot more practice with this, so it’s back to the still life drawings.