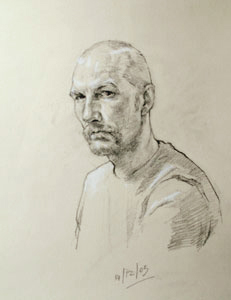 Tenth in the series – a self portrait a day until Christmas.

Half way through now, so I’m glad that this one turned out ok. It didn’t come easily though, this is thesecond one I did yesterday, the first one is in little pieces in the bin.

Originally this was going to be done with a conte stick, the one currently in the bin was done with one. Ijust could not get on with it at all, lack of experience with it I think. Very frustrating.

So I went back to a basic pencil drawing for the second attempt. I did something different with themeasuring on this drawing though, which is worth mentioning because it looks to me like I got everythingpretty close.

Having tried and been ultimately disappointed by the grids, I’ve gone back to the old sighting method,measuring distances on a pencil held out at arm’s length. You know, the classic cartoon of an artist with afelt hat holding his pencil out in front of him. This method does work, but if you get measurementswrong it can introduce distortion and really screw up the likeness.

When I was using the grids, my changing viewpoint when I moved was(I think) responsible for introducing distortion in the first few self portraits. Where there’s distortionin the later ones, it’s because I wasn’t measuring, or I got the measurements wrong.

So what was different about this one? How did I get the measurements more accurate?Simple really, and a happy accident to boot: when I started measuring to lay this drawing out, it struck me thatmy extended hand holding the pencil was only an inch or so from the mirror. If I moved abit closer, so that when my arm was at full stretch it was touching the mirror, my measurements would be thatmuch more accurate since the distance from my measuring pencil to my eye would be constant for all measurements.In the same way as attaching the grid to the mirror surface, this makes the mirror the picture plane.

It does appear to have paid off, I think that this is the most accurate drawing so far in terms of placementof the features. It’s no coincidence that its also the best likeness. I think.

This was one of those drawings that just seems to go well from the off, which happens quite rarely, but usuallysomething good gets produced when it does. The quality of the line is noticeably better in this one than inyesterday’s drawing, more varied inthickness and tone. It just seems to be better observed. I think I lost the major tone blocks by messing withtonal details too much though, it weakens the drawing a bit. I still wouldn’t really say this is a good drawing.It has its strong points, most notably that its all pretty much in proportion, but it’s not what I would call astrong, confident drawing. If I can get the accuracy of this drawing together with the character ofthis one, I think I’d be prettyhappy.

I look on this one as the first real portrait out of the ten I’ve done so far. Nice that this shouldhappen at the half-way point. Hopefully the twentieth will show as much improvement on this one as this one does onthe first.