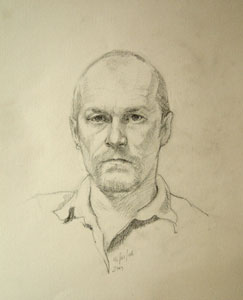 Last night I had the worst nightmare of my entire life. It knocked me for six, and it’s stillskulking around in the corners of my brain today, I can’t seem to shake it off.

Bear with me, this will relate back to drawing eventually…

I’m not going to go into details, but it’s a ghost I thought I’dburied a very long time ago. Obviously I haven’t. But I’m pretty sure that startingto draw and paint again has dredged it back up from the depths of my subconscious somehow. It has to do witha kind of ambivalence I’ve always felt about whether I was going to be a full time artist all mylife or not.

Now, at forty, I’ve realised that painting is all I’ve ever really wanted to do, but I allowedoutside (as in outside me) influences to dissuade me from it, or at least to make me question whetherpainting was going to my full time profession.

Last night’s nightmare really shook me up, but it also came with a small revelation. I now think that Iwas entirely wrong in mybackground page about my reasons for giving uppainting. Those things may have had an influence but are by no means the whole story, or even asignificant part of it. I think the real reason runs much deeper. It too personal for me to talk about here,it would’nt be very interesting to any one else and is beside the point anyway, but realising what it ishas changed the way I think about what I’m doing here.

When I decided that I was going start working again, I made a conscious decision that Ididn’t want to get wrapped up the esoteric side of art with a capital ‘A’. I hoped to avoid all thosedifficult issues that ensnared me in the past by concentrating purely on the craft side of painting, thetechnical aspects ofproducing good work, with the aim of getting back to making a living from painting again. Now Ithink that was slightly foolish, like learning to cook nice tasting food without worrying about whetherit’s good for you, whether you can survive on it or not. Or something like that.

But that’s the funny thing about art, (I’ll take mine with a small ‘a’, thanks). It has a way ofbringing out things which you never intended to be brought out at all. The other day I bought a bookby Isaac Asimov (a book I’d never heard of before called ‘Magic’) at the local librarycrap-books-no-one-ever-takes-out sale. I opened it at a random page and started reading. Thisquote jumped right off the page at me:

“…I don’t like to try to guess the thoughts and motivations in the author’s mind. I know, frompersonal experience, that clever analysts can find a great deal more in a novel than the author everrealized he put in. (Yes, I have been victimised in this fashion, but I also know that despitemy vehement denials that I meant this or that – I cannot entirely account for the unconscious mind.)”

That quote came back to me at about 5am this morning when I was lying awake thinking about my nightmare.I find it slightly disconcerting how down in the mouth or downright angry I look in myself portraits. A few people I’ve shown thissite to have remarked on it. Michelle says she doesn’t think they look that much like me because that’snot the me she sees. I look happier than that in every day life (she says). Up to now I’ve been dismissingit by saying that it’s my concentrating face, and I really thought that was true. But now I’m wonderingif there isn’t something coming through there, the same thing that gave me my terrible nightmare. It’s alllinked up with doubt over my abilities, doubt whether I’ll ever be good enough to make it as a painter.

In my rational mind I know that’s rubbish. I’ve sold work before, I’ve lived off painting before, pretty welltoo, and if that isn’t a definition of ‘making it’ I don’t know what is. But it doesn’t matter how much Irationalise it, those doubts just won’t go away. I can see them as clearly as you like inthis drawing, probably because I knowexactly what frame of mind I was in when I drew it. Michelle still refers to it as the ‘sad drawing’though, so I guess it comes across.

Which brings me back to Asimov’s quote above. I didn’t set out to do a sad drawing because I was in abad mood that day. I’ve been trying to eliminate anything like that and to draw exactly what I see, that’s whatthis site is supposed to be all about. But it does seem I’m on a hiding to nothing with that. As rational andpragmatic as I’d like to think I am, something of me is going to come out in everything I do, especially inself portraits. Maybe the drawings would be pretty worthless if that side of it wasn’t there.

At the end of the day, I think that could be whatmakes this ride so interesting, and so frightening at the same time. I’m being forced to deal with things Ithought I’d locked away for good, and if I won’t deal with it when I’m awake it’s going to make it’s presencefelt in bad dreams, or in my drawings. We all have our personal demons. In order to make lifemanageable we keep it below the surface where it won’t affect our day to day functioning, but it’s therenonetheless I’m sure.

Michelle says she thinks I’m brave putting all my thoughts live on this site for visitors to read,the two or three visitors I get anyway. But if this site and this project tolearn painting again is going to work out, I need to be honest with myself. It will come out anyway,so I may as well put it all down here, (apart from the odd secret we all have to keep to stay sane andfunctional.)

So back to the drawing. This self portrait was done before the nightmare, and doesn’t relate to itapart from it being the most recent drawing I’ve done and the closest to last night’s nightmare in time. Alsoit’s the first one I’ve done in which I don’t look completely unhappy, so maybe my unconscious is downthere slowly working things out for me. Who knows.