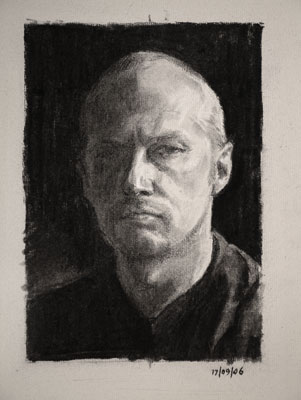 This portrait drawing is pretty much a reprise of thelast self portrait I posted, the main difference beingthat I worked on it longer and spent more time trying to get things in the right place.

Set up for this one was exactly the same as the last one too, which is why they look so similar. Iscreened off the bottom half of the window, so that the light was falling on my head from a little above,to the right (of me), and a little in front of me. This is basically how I light the majorityof the smallstill life drawings. The basic approachis the same too.

I approach all these drawings now with what I think of as a lazy version of the Bargue drawing technique.I start with my centre line, and relate points on the drawing to that. Then the dots are joined, the shapes of themain tone blocks roughed in, and the tone applied to the blocks with stomping.

Of course, this isn’t done sight size, which is the main difference between this and all the other drawings.Doing this sight size would have meant the head was about three inches high. In fact, there was no measuringdone in this drawing at all. I’m kind of surprised that I managed to get anywhere near a likeness, given that,but Michelle tells me this looks like me. I take a certain amount of encouragement from that, even though it’sa very rough drawing.

I really do think that theBargue drawings and thesight size cast drawing series arehaving a positive effect on my ability to judge measurements in the real world by eye. Of course, Ihave a very long way to go yet, but it’s nice to see at least some improvement. It’s heartening. I think back onmy return to painting and drawing ten months ago with some amusement now, at least I do when I remember howI thought I could get to areasonable level with all this stuff in a year or two. I’m constantly reminded of a quote a came across inmartial artsfilm recently, called “Fighter in The Wind.” It’s quite an inspiring story. The Korean hero, having had multipledisappointments and being subject to shaming in public, goes off into the mountains to train himself to be thebest fighter in Japan. His one time trainer says:

Now, it might seem a little cheesy for me to be drawing parallels between that story and my experienceswith learning to draw, butthe story often inspires me to keep going when I’m at a low ebb. We all need something to keep us going whenour goals seem unattainable.