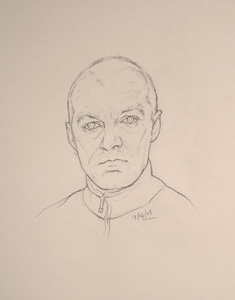 My first all line self portrait.

The heavy line I’ve used here came from the recenteye drawings, also done allin line, and before that from theBargue drawings.

Although it hasn’t helped the drawing much, and isn’t the way I usually use line, it reflectswhat I was trying to do with this drawing. The general idea is that by concentrating only on line,I cut down the amount of work I have to do, and should be able to see the lines and contoursin reality more easily, since that’s all I’m looking for.

It’s interesting how heavily I’ve drawn the eyes. I’ve been careful to state every detail Icould see, and concentrated on getting the shape of them right, accurately copying the waythe lids and the eyeball fit together (or as accurately as I could get it that day.) I can’t see oneof the self portraits I didrunning up to Christmaswhere I’ve accurately observed the shape of the eye. I also can’t see one where I’ve includedthe little V shaped point at the corner of the eye, an important part of the form of the eyewhich shows the eye line relative tothe other eye and anchors the eye on the face.

That’s what going back to line is about. Reducing what I have to deal with inorder to be able to see better. I am seeing better.The other day I noticed a partof my eye I’d never seenbefore, which we all have.

I just looked it up at Wikipedia. It’s called the plica luminaris, thought to be the evolutionary remnantsof a horizontally sweeping third eyelid. Crocodiles, birds, polar bears still have this eyelid,it’s transparent and protects their eyes from debris and when swimming. I just showed it to Michelleand she’d never seen it before either. I find that quite amazing, and I take it as evidence thatI’m seeing things more clearly than I ever have before.

A while ago I bought a book I’ve never studied properly, about the anatomy of the human body inrelation to drawing, ‘Master Class in Figure Drawing’ by Robert Beverly Hale. I just looked up theeye in that book, and sure enough, he mentions the plica luminaris there. Actually, he just callsit the plica, which is misleading because as I’ve just found out on Google, you have a plica inyour knee too.

The book has a plate of a Renaissance portrait done in the 16th Century by JacopoDa Pontormo, an artist I’ve never heard of before. This drawing clearly shows the pica lumiaris.I’ve just discovered it in my forties, around five hundred years later. I think there’s some valuein the fact that I experienced it myself, directly. I could have learned it from the book, thendrawn my eye and thought, “ah yes, there’s my pica luminaris.” But I think coming across it theway I did has imprinted it into my drawing consciousness a little more deeply. As far as I’mconcerned, it justifies this whole ‘learning to see’ idea right there.

So I don’t mind that my drawings have gone a little odd lately. The next few self portraitsafter this one were the same, with this thick, heavy line. I think that once I’ve worked through thismy line will come back more sensitive and more able to reflect what I see, and now I have at leastone new thing I want to use it to draw.