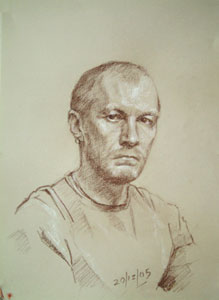 Eleventh in the series – a self portrait a day until Christmas.

Five days and no self portrait. Not good, but sometimes life gets in the way. Of course that means that I’ll bedown to 15 drawings at the end of the project instead of 20, which is disappointing, but it can’t behelped. I did somedrawings of Michellelast weekend so it’s not so bad.

Those drawings of Michelle threw up a nice thing, I did them on darker paper than usual, which meant I neededto draw the highlights as well as the shadows, instead of just touching in a few of the strong highlights on thelighter paper I’ve been using. With darker paper, the paper becomes the mid tone. It’s a nice way to draw, feelspretty natural and helps to get you dealing with blocks of tone I think.

For this one I fancied a change so I used a dark brown conte pencil and the usual white conte stick. I stuckwith the darker paper too. Starting out with measuring, I outlined the head and got the eye line, centre line(from the top lip to the bridge of the nose),eye width, nose and mouth line in. And the ear. And I ran a vertical line down from the right eye(on the left on the drawing) for use with measuring. This put the right eye bang in the middle ofthe drawing again, like the last one. I like it like that, it seems to fix the gaze.This stage was done with a normal B pencil. Also anotherchange with the measuring, but this only applies to self portraits.

Other than that, I used what’s becoming my standard approach for these drawings – outline the main blocksof tone, ignoring as far as possible what they represent, then fill them in a flat tone, but lightly. Thenthe dark tone accents go in, around the eyes, mouth, nose and chin, the ear etc. By this time I have agood idea if its a reasonable likeness or not and if the proportions look about right, which usually meansa few adjustments. Getting the shape of the head right and establishing the main planes of the face goesa long way to getting a good likeness I think. I remember reading somewhere recently about this, the bookpointed out that we can recognise people we know from a distance, even if we can’t really make out theirfeatures.

Once the adjustments are made, I go in and start stating the features a bit more, which iswhen the likeness really comes in (or not, as the case may be). Basically I’m trying to replicate whatI see as closely and as faithfully as I can, same as thepaintings. I read a nice quote from JohnSinger Sargent the other day onPainters Keys:”I do not judge, I only chronicle.” I’d be happy to be able to think about judging. I’m having a hard enough timejust chronicling, thanks. I like the spirit of what he says though. I got hold a book of his portrait drawingsrecently, I can’t stop looking at it. I reckon I must leaf through it every day. Virtuoso. There’s a very nice sitededicated to him here:John Singer Sargent Virtual Gallery

Another nice quote from Sargent: “paint a hundred studies of a head to learn the form”. Well, that soundslike a good idea. So that’s going to be my portrait painting project, when I start doing portrait paintings.One hundred portraits before I do anything else. Top idea.

Anyway, back to these paltry twenty (fifteen now) self portrait drawings. This one I think I’m happy with.Best likeness so far I think, maybe the break was a good thing. Not much flair though, it’s a bit scrappy looking.No problem, I shouldn’t be worrying about that yet anyway. I’ll give it a three out of ten.

I’m revising the mark looking at this one today, the drawing is way too scrappy and the tones are wrong. I didn’tdo a good job of using this darker paper on this one, and the shape of the head is out. I’m giving it a two.