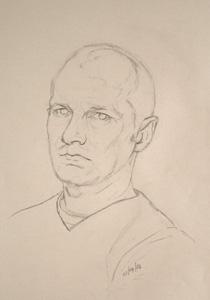 If I look a little rigid in this drawing, it’s because it took eight hours to do and I drewit standing up. I got a bad back.

This drawing was largely an attempt to get everything in the right place, to accuratelyobserve the relationships of one shape to another. That’s why it took eight hours to get solittle done, there’s a huge amount of corrections in this drawing.

I’m starting to realise how important the intensity of the line is in showing form. This ispartly what I was hoping for by concentrating only on line, to understand how to use line tomake something live a bit better than I currently do. It seems to be happening, if slowly.

I’m not talking about drawing style, that’s an anathema to me at the moment. I mean that I’mtrying to match the relative intensities of my line to what I’m seeing. In a copy of aSargent drawing I did after thisone, it struck me how varied the intensity of his lines were, and how light overall. He reservedhis strongest marksfor a few points, the main features and the ear mostly. Everything else was drawn very lightly. I’msure he was being led by what he saw in this, not by a stylish abstraction. “I don’t judge,I only chronicle,” he once said. Not entirely true because apparently he elongated the bodiesof some of his sitters in order to make them appear more beautiful.

Despite the odd stance and strained expression, I’m quite happy with this drawing. It was meantto be an exercise in rigorous observation, which it pretty much is, as rigorous as I currentlyget anyway. I can also see that I’ve started to vary the intensity of the line more. Ineed to see the relationships between the weight of contours in life better, and I should beable to translate that into better drawing eventually.