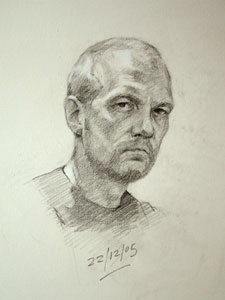 Thirteenth in the series – a self portrait a day until Christmas.

My goal with all these portraits has been, and will continue to be, to draw what I see. But I’m beginningto wonder if that’s a realistic aim. Sargent said “I do not judge, I only chronicle”. That’s what I’mtrying to do too. But it seems that no matter how I try to produce a ‘snapshot’ of reality in these drawings,extraneous stuff creeps in which I seem to be powerless to prevent.

Sometimes it’s just plain bad drawing, sometimes it’s unnatural distortion caused by inaccurate measurementor the drawing grid. In this drawing I can see the mood I was in yesterday. It wasn’t a good day.I have times when I lookat work of a standard that I would like to achieve, and I think, yes, I’m catching up. Give me a year and I’ll benot far off. I also have days when I think that no matter how many drawings I do I’ll never get there,and I get depressed. Yesterday was one of those.

One thing I do know is that if I don’t produce there’s definitely no way I’ll get there, so I draw (orat least try to) when I don’t feel like it and can’t see the point, just the same as I do on positive days.Whether it’s obvious to other people or not, I can see what kind of day I was having yesterday from this drawing.Even the fact that the face is in full shadow seems to suit the mood I was in, but it’s only because I couldn’tsummon up the enthusiasm to spend half an hour messing with the position of the light to get nice shadows,so I drew this one sitting under the normal 40 watt bulb in my back room.

This drawing took four hours, a long time for me. I didn’t start it till midnight and worked till just gone four,so I guess I was pretty tired for this one. Being low on confidence, I used pencil instead of anything moreinteresting, and I was feeling pretty lack-lustre throughout the drawing. Towards the middle, I decided that Ihated the drawing and I was very close to tearing it up. The main reason I didn’t is that it was toolate to start another one and I didn’t want to miss any more days.

Maybe trying so hard just to see clearly and to record what I see faithfully is counter-productive in thelong run and I’m fighting my own nature. On the other hand, maybe I’m doing the right thing trying to strip my work down to thebasics and putting everything else aside until I get those right, I just don’t know.

Thinking about this again today is putting me back in the mood I was in yesterday, and no-one likes to bein a bad mood so I’m going to leave it here, except for one last thought: I’ve chosen my current road, and there’ssome benefit to be gained from following a chosen path until you can’t follow it any further, whether it’s theright one or not. If it’s the wrong one, at least you’ll know for sure if you follow it to the end.If I start changing my aims now, I’ll neverknow if it was the right one or not. So without further ado I’m putting this one to the back of the sketch padand moving on to the next one.