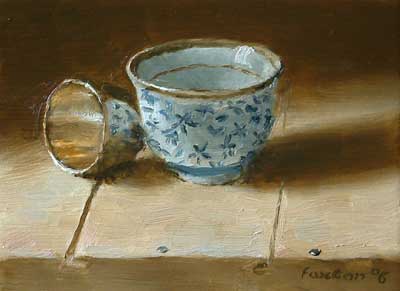 Painting with a Limited Palette

After the heady excitement of painting with four colours at once in the last painting, I came back down to earth with this one and did another raw sienna and ultramarine blue study.

Well, mostly back to earth. I did add a touch of yellow ochre to the inside of the egg cup at the end, it just felt like it wanted a little more chroma.

I have a feeling I might be starting to find my way around raw sienna now. When I was painting only with burnt sienna and ultramarine, I tended to use the greys produced by a mix of the two with white as the dominant colour, pushing it more towards warm or cool as needed.

Raw sienna seems to me to need slightly different treatment when used with ultramarine. It seems to be at it’s best when the ultramarine is used less and more of the raw sienna’s own character comes through.

Of course, this is only my fourth study with these two colours, and that’s quite obviously not enough to basing any firm conclusions on. But despite that, I think I got an inkling of a way that I can use this colour slightly differently with this little study.

The shadow areas are made with a mix of raw sienna and ultramarine, as I would do with the burnt sienna, but with much less blue. One of the things that’s struck me about using a raw sienna/ultramarine palette is that I can’t get as deep a dark by mixing the two together as I can with burnt sienna. In this painting, I accepted that as being in the nature of raw sienna, and worked with a more compressed tonal range.

At the beginning of these tonal studies, I did some exercises involving painting the same subject twice, first with ultramarine and white and second with cadmium red and white. Those exercises proved to me that it’s quite possible to get as convincing an impression of light with a compressed tonal range as you can with a wider one.

In fact, I’ve come to the realisation that a compressed value range has to be used in any case, since oil paint, or charcoal for that matter, can’t produce a value range as wide as nature can.

So for this one, I tried to apply the lessons from the blue/red studies, accept a narrower tonal range, and try to work with it instead of fighting it.

There are mistakes in the tonal balance here though. At least, what I would call mistakes. I’ve let the value of the wooden box on which the objects are standing get a little too light, I think. The ‘ground plane’ is generally one of the first things I put into a painting, following as I do now the Harold Speed approach to building up a painting.

Because of that, I ran out of headroom with my lights. When I came to put the highlights onto the cup and egg cup at the end, they were somewhat lost. This is always a sure sign to me that I’ve got the balance of the tones wrong somewhere. I think the lighter tone of the background shadow made me use a lighter tone on the top of the box to compensate, meaning that too much of the overall tone is in on the lighter end of my range.

I was beginning to think that I’d got a handle on value, and that I needed to concentrate on it less now and could give more of my attention to colour. That’s partly why I’ve started to expand my palette a little. But obviously I’m not at the stage yet where I can take my eye off that particular ball completely and have it take care of itself.

I find that when I have a wider tonal range I can get away with that more, but when it’s compressed, like it is here, I still need to pay close attention to it.

Lately I’ve been trying to take the problems of oil painting one at a time and practice them in isolation from other elements in order to make the process of learning more manageable. That’s why I stopped using colour and did a series of tonal studies.

Now I’ve started to expand the palette and to slowly reintroduce colour, I’ve noticed that my control of value is starting to weaken again.

I’ll have to watch that. Painting is a complicated business, requiring the simultaneous consideration of a lot of different elements – form, value, colour – even expression. Always it seems that when I concentrate on one area another will fall down. This time, it was the values.

That said, I’m fairly happy with this one as a simple study using a restricted palette. I think it’s the most balanced painting I’ve done so far with raw sienna. I’m starting to think that actually, raw sienna can be quite a beautiful colour when it’s used in a way which is sympathetic to it’s particular qualities. I just need to make sure that everything else doesn’t fall apart whilst I’m trying to make that happen.