Over the years I worked in most of the good sized midlands towns, mainly Leicester, Birmingham and Lincoln. When I was in the north I worked in York a lot. My first time out was in York with my old friend from school John Cheall. I remember being very nervous. 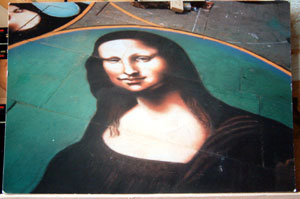 Well you’ve got to do the Mona Lisa at some point when you’re a street artist. Actually its a very good crowd puller, because everybody wants to check out the enigmatic smile, its a conversation piece. Quite a bit of marketing went into street art. I used to punch up the colours a lot to attract people over to the drawings.

These are a couple of photo’s which somehow have managed to stay with me. Worth a look for old times sake.

There were some very nice things about working on the streets: A free and easy lifestyle, a nice community of other people, buskers and performers, working the tourists or the shoppers. On a nice day in York it could be lovely outside the minster, chalking away on the pavings in the dappled morning sunshine.

But there was always the threat of rain. And also the times spent shivering all day in the freezing cold in grey shopping centres like Birmingham, that wasn’t so pleasant. 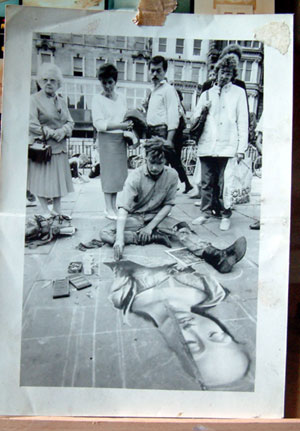 An old pic of me working in Edinburgh during the Fringe Festival. I suppose I must have been about 19 or 20. Dyed hair so it doesn’t look like me, but you know, it was the eighties.

This pic was taken by a dyslexic photographer I met when I was out one day. He’d been following a group of Edinburgh’s punks around while they took mushrooms and sniffed glue, and had some very nicely done urban apocalypse type photos. His dyslexia was so bad he had to get me to narrate my address into a recorder. I never expected him to send me a picture but he did. I hope things worked out for him. 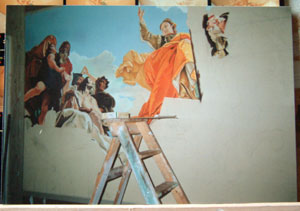 At work on a copy of a Tiepolo painting for use on the streets. This one was 12′ X 8′ so was in two parts to help with carrying it. Later on I used to do all my work on big canvases and tape them down, spending the day reworking them. They got so badly smudged pretty much the whole thing would need doing again the next day. If it got rained on that usually meant a few days on it at home getting the colours back.

Sometimes I still miss that life. It was hard work, but the money was good enough not to have to work all the time. And I was beholden to no-one.