I don’t believe in talent.

I don’t believe that anyone is born with a natural ability to draw.

Or make music, or play football, or anything else for that matter. I don’t believe in talent. Particularly in relation to representational drawing and painting, I believe that the skills we need to produce beautiful work are learned and perfected over time, even by the ‘greats.’

I think that the greats are (or were) the greats because of two things: high levels of personal motivation, that helped them to keep working when most people fall by the wayside, and secondly, being lucky enough to find themselves in nurturing environments from an early age.

And the second of these is probably the most telling.

Mozart is often used as an example of innate talent. But he was born to a father that not only composed for a living, he also taught music. Mozart was drilled from a very young age by a father who was obsessed with seeing his son succeed. Mozart’s early compositions, often touted as evidence of his incredible precocity and talent, were certainly not great symphonies and were very likely edited and revised by his more experienced father. He didn’t compose the beautiful work we know him for now until he was a young adult, by which time he’d already put in thousands upon thousands of hours of controlled practice.

Picasso is a similar example. There are many documented cases of extremely high achievers being born into such nurturing environments, and much research has borne this out. But environments like that are rare, and not all people so luckily born will take advantage of their good fortune.

That’s why achievement at the really top levels is rare, not because a very few are blessed with a gift that the rest of us don’t have.

You Liberate Yourself By Accepting Responsibility For Your Own Achievements

The idea of innate talent is particularly well established in the arts, which is unfortunate for us painters.

But we don’t have to fall in with accepted wisdom.

Accepting instead that great artists are made and not born has two results, one very sobering and the other liberating:

That’s the position I start from.

I came to this realisation in 2006, when I’d only been on this road for a few months, and wrote about it in a post entitled ‘There are no short cuts.’ Reading that post again now, five years later, the only thing I’d change is that I no longer believe that I was born with a talent for drawing.

As a child I was better than most of the kids I knew, that’s true, but it’s in no way proof of innate talent. I drew a lot when I was little so I had a head start, simple as that. Unfortunately, like the hare, I sat down and fell asleep for a while, for far too long.

Now I’m trying to make up for lost time with a whole heap of other stuff to deal with at the same time, bills and a job. Such is life.

. I’ve just finished it after a reader here was kind enough to send me a copy. It’s confirmed much of what I already believed, and although it’s written primarily from a business point of view, much of it is applicable to learning representational painting.

But be warned: if you believe that some people are born naturally gifted, be prepared to sacrifice a few of your sacred cows on the alter of your ego. Once you’ve done that, you’ll find that you’re in a position to really take control of your own progress. And if your experience with the book is anything like mine, you’ll find yourself inspired.

I know I’ll never be a Velazquez or a Veronese, I’m already 45. They were already Ferraris in their teens and I’m an old banger wheezing slowly up the hill. That doesn’t matter to me.

Although I know I’ll never reach close to those heights I guarantee you this: by the time I pop my clogs I’ll be a hell of a lot better than I am now. What matters to me is seeing how far I can go from where I am today, and from where I’ll be tomorrow. Of course there are some things that are outside our control, but that doesn’t stop us working on the things that aren’t.

I plan to post at more length about this before too long, and to develop this theme over the rest of this new year in both the posts I write here and the work and practice that I do.

I was in two minds whether to leave the comments open on this post. I have left them open because I like to hear from people so much, and I learn so much from the comments that everybody leaves here. But I will say this: I don’t want to get into a long discussion about whether or not talent exists with people who think it does. For myself, I refuse to accept that limitation. I will not believe that there is a ceiling to how good I can get that’s enforced by any limitation I can’t control except time. If you believe that there is then that’s entirely up to you of course, but don’t expect me to argue with you about it, I’ve got too much practice to do.

This site is for people who want to get better at what they do, and who believe that with practice, they can.

Now I know from experience that I’ll have times when I’m too down to work, when I lose hope and give up temporarily. I have bouts of depression that regularly floor me (there, I said it) but that won’t stop me trying. The only things that can limit how far I can go from here are my own motivation and the amount of time I have to practice in.

If you feel the same then hop in, there’s room in this old banger for plenty more.

It doesn’t seem right to post without adding a picture, so here’s an orange from around the time of my ‘no short cuts’ post and a sketch of a clementine I did today. It’s as fair an illustration as I know how to find of what can be achieved with time and practice. 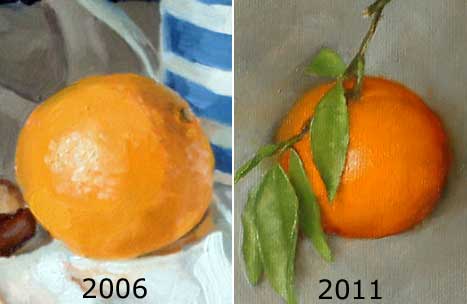