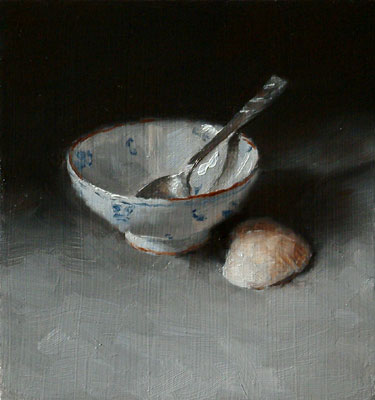 This is a part of my limited palette series, a series of still life studies painted with only two colours and white.

This one was painted with only french ultramarine, burnt sienna and flake white.

I think I’m starting to hit my stride with this series now.

The composition for this one comes straight from one of the still life drawings, number 43, thebowl, teaspoon and shells.

originally, this was only going to be a grey study. I’m getting very interested in the rangeof greys I can produce with my simple two colour palette, and the subtlety that can be expressed withthem. From deep warm shadows to cool lights, they can express form and light as well as anyfull colour palette.

This painting was done entirely in mid grey originally. First the simple tone blocks,then right through the defining of the edges, (something I spend an increasingly greater proportion of thetime on), where they were soft and where they were sharp, and into the detail phase and the placing ofthe highlights, and I still hadn’t moved towards either warm or cool at all. I had half a mind to leave it asa grey study since it was working well, but I can’t resist a bit of fiddling, so I added just a little coollight blue into the lights on the bowl. Then just a touch of warm sienna in the shadows on the shell, then alittle into the deep shadows. Before I knew it, I was painting in the pattern on the bowl with some grey bluethinned right down with linseed oil, and putting in the sienna edge round the top of the bowl, adding somewarmth to the teaspoon to try to catch it’s old, worn silver surface.

To my great surprise, it had gone from being a tone study in flat, mid grey to a colour painting, andit didn’t need any more. Of course, the objects I have here lend themselves to mylimited palette. The only colour I could possibly have wanted to add would be a little yellow ochre for theshell, but what surprises me is that the vast majority of this painting was done with grey, and is still grey,but I don’t miss the colour.

I seem to be having minor revelations all the time lately. When I first realisedhow important edges were, how much could be expressed by varying their quality, I felt an immediate changein the way I approached the paintings. Before that, the series oftonal still life drawings had shownme a way to deal with relative tones that resulted in a significantly more convincing feeling of light.Now I’m beginning to realise something about colour. It’s difficult for me to put it into words clearlyright now, because it’s still a nascent thought which I haven’t worked through practically in the paintingsyet. But you know me, I love to blather on, so I’ll try anyway.

I guess it basically boils down to ‘less is more’. When I look back at my earlier paintings of fruit, they lookflat and cartoony to me for two reasons. For three reasons. Firstly, the tonal balance is out. Secondly, theedges are all the same, hard and sharp. Thirdly, the colours are too bright. Although I was trying to match thecolours I saw as closely as I could, thinking that doing this would lead me to more convincing paintings anda stronger feeling of light, I was missing something. I have an idea that that something has to do with theway our eye/brain combination works when we look at things, with focus.

Certainly it’s the case with edges that wherever you focus your eye, the edges of an object look sharp.If you then look to another part of the object, the edges there look sharp too, so if you paint or draw anobject a piece at a time in this manner, you will reproduce all the edges sharply. But that’s not how we see.When you look at a particular part of an object, all the rest of it is thrown out of focus. And edges in lightlook significantly sharper than edges in shadow. When some of that is reproduced in a painting, the effect ismore convincing, more naturally reflecting the way we see.

I’m beginning to think that something similar happens with colour too. When you look intently at a shadow,for instance, it will seem darker. When you look at the colour of a plane of an objectin light, it will look brighter. If it’s a tomato, say, you will be looking and looking, trying to gauge theexact hue of that red, and your brain will be thinking “red, red, red”. So what do you do? Hit straight on yourbrightest cadmium red and put a big splurge of it on your picture.

But the trick I think is to try to look more at anobject as a part of it’s surroundings, not in isolation. I think that the general appreciation of it’s lights anddarks may be significantly more important to the way we see it than it’s colour. But because we’re so used topatterns of thought that describe an object by it’s local colour, and because things are intensified whenthey are looked at in isolation, we can’t help but tend towards an overstating of the local colour. Atleast I can’t.

When I started this site a year ago I called it ‘Learning To See’ because I thought that the skillof clear sight was the primary one I’d lost. I needed to learn to see all over again if I was to draw andpaint things as they really are, rather than how my confused and untrustworthy brain tells me they are.Now I’m also beginning to appreciate that I need to think more about how we see too.

But all this talk of seeing aside, there’s something else starting to come into the pictures as time goes on:expression. Increasingly, I’m not looking to produce an exact reproduction of what I see. In fact, I’mnot sure I ever was concerned solely with that. I concentrated on it because I knew I needed to improveboth my seeing and my technical skills before I could start to produce half-decent work.

But as I’ve started to move away from literal translations, beginning with the deliberate changes Imake with regard to tone, the door is opening for the picture to be a little world in itself, to be capable ofexpressing some feeling or other. This is thin ice for me. I know full well that that road can leadto pretentiousness and narcissism. I know because I’ve been there, many years ago.

Because I’ve done decorative, vacuous and pretentiouswork in the past, and because I’m so disgusted with the often trite, self serving and publicityseeking ‘Art’ (please note capital ‘A’) I see winning prizes and talked about in the press these days,I feel a need to cutthrough all that bullshit with simple paintings. I want to paint things just because I find thembeautiful. I’d like to communicate some ofthat to someone, anyone, who might stop and look for a minute and say,”Wow, I’d never noticed before that the way an old teaspoon reflects the light could be so beautiful”. Or apiece of fruit, or whateverit happens to be. I’d like, if I can, to make a little moment of peace and quiet in this frenetic,money hungry world and catch it in a picture, as much as anything else because I feel the need of itmyself. Just some plain, honest feeling that doesn’t need justifying with some pseudo-mystical claptrapthat no-one really understands.