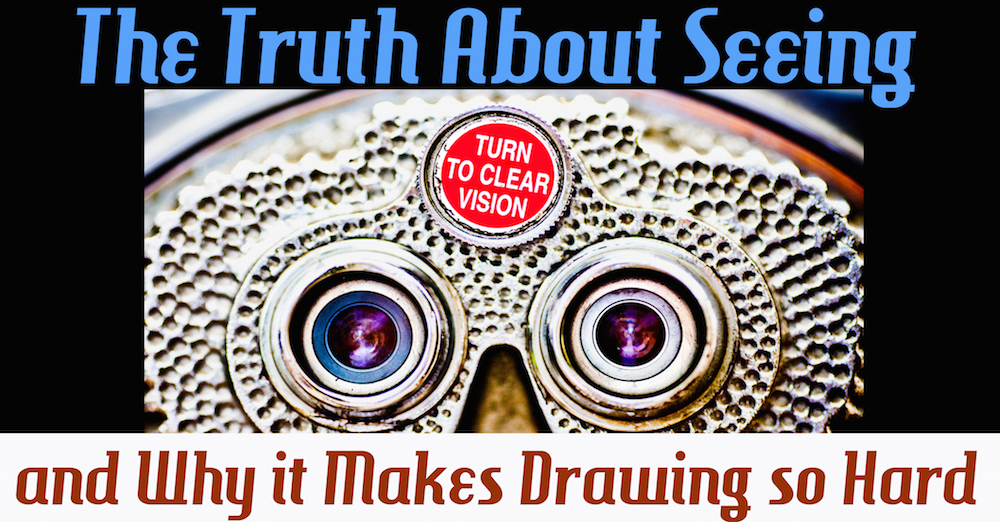 When you’re starting out learning to draw – and actually, even when you’ve been going for a while – drawing even halfway accurately can seem incredibly difficult.

No matter how you try, your drawing just doesn’t look like your subject. The flower is a different shape. The portrait looks like a different person. The hand looks more like a jellyfish.

Drawing accurately mystified me for a long time. When I returned to drawing, a few years ago now, after a long gap, it was single biggest thing I struggled with.

I just couldn’t understand why I was finding it so difficult.

With time, and a lot of practice, I learned enough measuring and comparing techniques and developed my drawing skills enough to be able to draw reasonably accurately.

The other day, whilst searching for information about how we see on google, I stumbled across a scientific paper that explains something about how we look. Something that is absolutely key to why drawing accurately is so hard.

It surprised me, and I think it might surprise you, too.

It’s all in how we look.

The art of Looking

You might think that when you’re just looking at something that you look at it in a similar way to when you’re drawing.

Ah, but you’d be wrong. Because when we draw, we look at things very differently. We direct our attention in a very different way.

What happens when we look

Usually, when we’re looking at an object, our eyes flick around it, pausing for short intervals at particular points that we think are important or interesting.

The movement of our focus from one part to another is called a saccade (a French word meaning jerk, pronounced “sakahd”). The path our eyes take across an object, or a picture, is a pattern of saccades.

Eye-tracking technology allows to see much more clearly now what our eyes do when we look at things.

The pattern of saccades when we’re just looking at (not drawing) a picture of a face might be something like this: 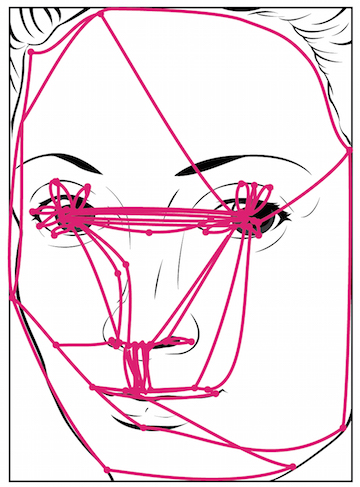 As you can see, the focus of attention is flicking around. You can almost feel the brain picking up the bits of information it needs to gain a general picture of what that face looks like, what its most important characteristics are. Notice how much time the eye spends on psychologically important elements, like the eyes, nose and mouth – especially the eyes (the window of the soul).

Advice we often hear about drawing accurately is to see the subject as shape, to try to disengage it from its psychological connection. It’s good advice. So what about when we’re looking at something more abstract, like a random shape?

That’s just what the scientists tested in the paper.

It turns out that we use a similar pattern of saccades, our eyes flicking around the shape and gathering information. There doesn’t seem to be any particular area of focus, since no part of the shape is psychologically important to us. 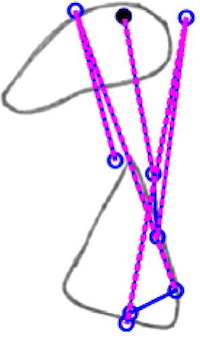 How we look when we draw

But when we decide we’re going to do a drawing of that thing, the pattern of saccades is very different.

We still look in patterns of saccades – fixating on a particular area before moving on. But instead of our eyes flicking all around the object we’re drawing, a typical zigzag pattern, they creep around the outline a bit at a time, pausing as they go.

Relating the parts to the whole

Drawing accurately is about relationships. Specifically, it’s about being able to relate the part of the drawing we’re concentrating on to the whole.

It stands to reason. Have you ever got the shape of a head wrong? You probably weren’t relating the part of the outline you were drawing correctly to the whole. A very common mistake in portraits is to place the eyes too high in the head. Usually, a person’s eyes are positioned somewhere around half way between the top of their head and the bottom of their chin. But there’s a strong tendency when we’re drawing to place them higher up and stick them in the middle of the forehead.

Having trouble with your still life of flowers in a vase? Chances are some of your flowers, however well they may be drawn in detail, are the wrong size when compared to the bouquet as a whole.

Relationships. If they’re wrong, so will your drawing be.

Now think again about the paths of our eyes when we draw. They creep around the outline. They fixate on a small area at a time. They don’t compare, they don’t move across the object to check the area we’re drawing against the whole.

We’d probably do better if we followed a saccadic pattern more like the ones we use when we’re not drawing!

I’m a big fan of testing out theories practically to find the truth of them (or, more often, the lack of it).

To test this one, I took a photograph of a simple object, printed it off, and drew it twice. First I used a sequential, contour approach. Then I drew it again, taking a more holistic approach. 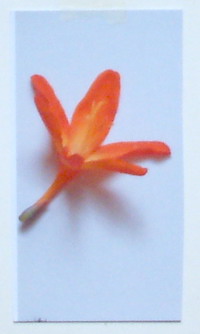 I chose a photo because it’s flat, making it much easier to do a like-for-like comparison.

Now here’s the contour drawing I did. I started at the bottom left and followed the contour of the shape of the flower around clockwise, taking care not to relate any part I was drawing to any other part. Frankly, that was quite hard, since I’ve done a fair bit of drawing accuracy practice in the past. 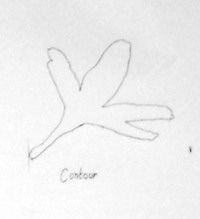 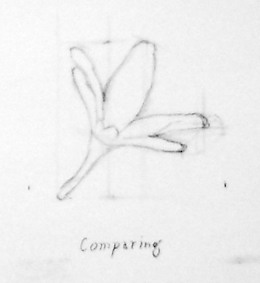 I was constantly comparing parts to the whole in this drawing. I began by estimating the highest and lowest points, and furthest left and right, and proceeded to relate everything I drew to those points and to other parts of the drawing. I consciously tried to estimate angles of lines.

Here’s a few points to bear in mind about how this drawing was done:

Once both drawings were done, I traced them and placed the tracings over the original photo to see which was the more accurate. Here are the results: 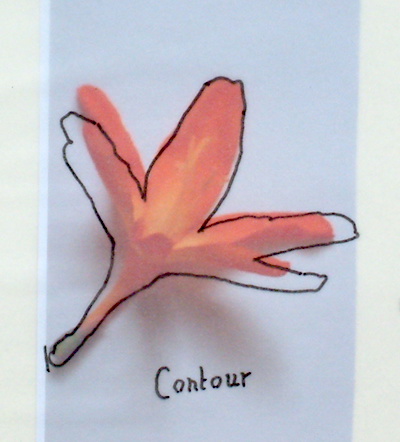 Woah! How out is that drawing? 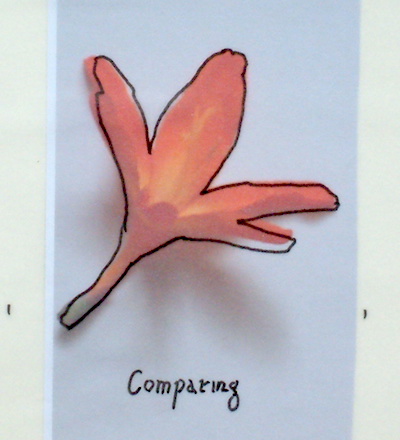 Still some mistakes (obviously I need more accuracy practice!) but much more accurate than the previous one.

Now I’m aware that this is hardly a scientific approach to testing the theory, but it I think it’s enough to point towards the truth.

How to look holistically

A lot of the teaching about drawing accurately starts to make more sense in light of this. Because a lot of the advice is about relating parts to each other, and to the whole. Here’s some common approaches to ensuring a comparison-based method of drawing:

Is contour drawing bad for you?

We all know of the blind contour drawing exercise, first popularised (I believe) by Kim Nicolaides. I’ve done that exercise myself, numerous times, and whilst the results could never be called accurate, they do have a vibrant quality I like. 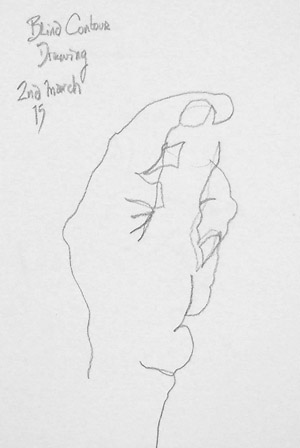 In Drawing on the Right Side of the Brain, Betty Edwards has some really effective exercises for developing spatial awareness and seeing the whole, for drawing more accurately. She also, however, has a couple of contour drawing exercises. It would seem from what we’ve learned about the differences in saccadic patterns when we draw and when we don’t, that contour drawing is working against spatial awareness approaches.

At the very least, spending time on contour drawing isn’t developing your accuracy. It’s reinforcing a saccadic pattern that makes it more difficult to draw accurately. Research into brain plasticity tells us that what we spend the most time doing becomes wired into our brains. It’s also mutually exclusive – there’s only so much brain. If you develop your linear, contour-based saccadic pattern more, it’s likely at the expense of your accuracy.

But that’s only a concern if accuracy is important to you. It isn’t for everyone, of course.

If you want to know where I sit on this, I think accuracy training is the single most powerful drawing practice there is. Quite apart from training you to draw more accurately, it also develops your ability to focus for long periods of time like nothing else. It develops discipline, and it develops spatial awareness, which translates directly into composition and design practice.

And there’s something more. I find this hard to put into words, but I felt that the intensive accuracy practice I’ve done increased the resolution of my eyes (probably more accurately, my attention) so that I began to see more. For me, it wasn’t until I did some really hard core accuracy practice that I really started to develop artistically.

But that’s just my view.

Does this help us draw better?

If we realise that a large part of what makes drawing accurately so hard is not relating the parts to the whole, not seeing the gestalt, does this information help us develop better drawing habits?

Yes, I think it does.

It explains the reason for the various methods of forcing a comparative approach to drawing, and an emphasis on working from the general to the specific. If you want to draw accurately, you’d do well to practice with various methods of doing this, as well as constantly developing your ability to estimate distances and angles more accurately. This is a skill that you can build until it becomes automatic, allowing your brain to concentrate on other things in your drawing – design, aesthetics, meaning, whatever you’d like that to be.

The really interesting question for me here is whether having this knowledge can enable us to develop new drawing accuracy approaches, and exercises to develop skill at them, approaches that can be even more effective than the common ones we use.

I don’t have any firm answers to that yet. But it’s an interesting line of enquiry, and one I intend to pursue further. I believe that no knowledge is ever a waste of time. I’ll let you know if I find any little golden nuggets in that digging.

In the meantime, perhaps the most useful advice I can offer you is to try to bear this in mind as you lay out a drawing. Remember how your saccadic patterns change when you draw.

And try to remember constantly to look holistically, to relate the parts of your drawing to the whole.

Assuming you want to draw more accurately, of course 🙂