These were done one after the other.

The first onetook about an hour and a half andis the worst of the three, both from a drawing and a likeness perspective.

The second one took abouthalf an hour, looks a little bit like Michelleand is (for me) the nicest drawing of the three.

Number three took about half an hour too, is the best likeness, but the drawing annoys me, too scrappy.It could easily have been much nicer than it is. 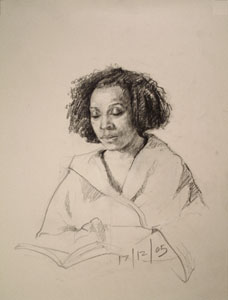 I did this one just like a self portrait – half an hour of measuring before I starteddrawing and putting down tones. This is when I discovered that sitters don’t sit as still as you do yourself.Many corrections and much frustration later I decided to just start drawing, thinking I could maybe sortout any glaring inaccuracies as I went along. I don’t think my eye is well trained enough to spot them though,because this looks nothing like Michelle. The fact that I was struggling comes out in the drawing I think.It looks hesitant and constrained. Even though I measured there are obvious inaccuracies in this drawing.Most notably the nose is much too long. One out of ten, must try less hard. 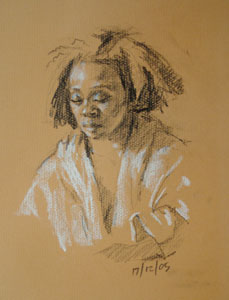 After number one hadn’t gone so well, Michelle said I should just do a quick one, 15 minutes.It was actually half an hour, but still much quicker. I generallydon’t like quick poses because I don’t like to feel rushed when I’m drawing, but she persuaded me. For this one therewas no measuring. Because I was intending to do it quickly, I grabbed a darker sheet of paper, a darker pencil (6b)and a white conte stick. Off I went. This one felt totally different right from the start, much freer. Some of the drawing isactually quite nice in this one I think, the main tone blocks, especially the shadow side and cast shadow of the head,are clearly stated, and it gives the drawingmore life. Note to self – work into the main tone blocks less. This really doesn’t look like Michelle,but its a betterlikeness than the first one. No measuring meant some big mistakes though – the eyes are way too close togetherfor a start.

What this drawing does have though, is a feeling of how I see Michelle at the weekends whenshe’s relaxingin her dressing gown reading, with no make-up on and her hair all over. I love her most when she looks like this.She thinks I’m odd. Because of that feeling, I like the drawing more, so I’m being generous and givingthis one three out of ten. 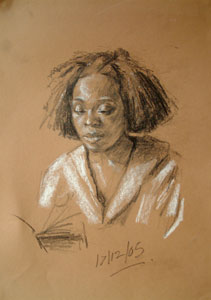 I did some measurement for this one, just quickly. These drawings taught me that when you draw a sitter, you need tomeasure fast before they move, if you’re going to measure at all. I’m not good enough to get it without measuring,so I need to learn to measure fast. One way I plan to address this is to reduce the measurements I take down tothe essentials, the minimum I can work with and get a good likeness. After that it’s just practice, practiceuntil I get better and faster.

The paper is a shade darker on this one (darker than it looks on the photo), I don’t think it works as well. Its just a bit too dark to work as a midtone I think. I’ve just been down the art shop and got a bunch of sheets that look about the same tone as thesecond one.

I was going for something similar to the second one here, but with the proportions better laid out.I didn’t go toofar wrong I don’t think, but there’s still a few glaring problems. The eyes and nose work well together, but ifyou run a line down the centre of the face, through the nose and down to the mouth, you can see that the mouthis out of line, by almost a centimetre on the original drawing. Well that’s not going to help. The outside lineof the cheek is right with the mouth though, which means that it must be wrong with the nose. I think I’ve drawnher face too thin because of that mouth alignment problem. Schoolboy error, I should know better by now.Two out of ten.

Doing these three was great practice for commissions, I picked up a lot about what’s different when you’reworking with a live sitter than when you’re doing a self portrait. Michelle is my obvious first sitter,because she’s around a lot and will put up with my none sense more than most, I’ll probably be drawing her a lot.So she’ll be getting her own page soon.