These three drawings were done with about a month between each, and were each an attempt to construct a selfportrait drawing using theLoomis approach to head construction.

It’s interesting to see how differently they’ve come out. You certainly wouldn’t think that they wereall drawings of the same person. At least, I wouldn’t. Distant cousins maybe. But, regardless of the accuracy ofthe likeness, they all started the same way, with a ball for the cranium, and a central line divided by marksfor the hairline, brow, nose and chin. The brow line is the most important, and the other divisions were taken fromthat.

Of course, I had to get a bit creative with the hair-line, since mine has moved somewhat northwards inrecent years, but I still marked the division where it should have been, and judged the actual positionfrom there. 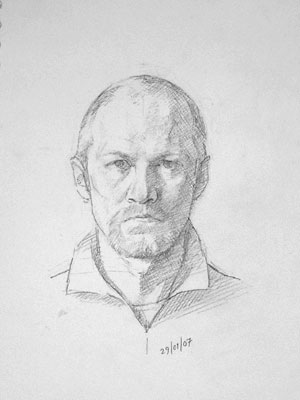 This first one was a pretty tentative attempt. Done back in January, I was still very much getting thefeel of the Loomis approach.

Time and again I’ve been bothered by how downright angry I look in a lot of my self portraits. To an extent,the expression I end up with is a result of how much I was struggling with the drawing. It certainly lookslike I struggled with this one.

Originally, this was only going to be a line drawing, just a practice piece with no attempt at a likeness orany tone. But I guess I got a bit carried away. Likeness-wise, this one isn’t terribly good, but at least it doeshave some feeling of form, even if it’s somebody else’s form. 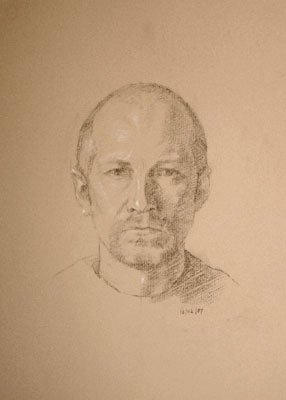 This one is a slight improvement, largely because I spent longer on it. Again, I started with the flattened ballfor the cranium and the centre line. All these drawings were done with a face on view, because I found thesethe easiest of the viewpoints to do in the Loomis head drawings.

Whilst starting this way has certainly kept me from making any really blinding errors of form and measurement,it doesn’t guarantee a likeness. I don’t think the Loomis approach is any kind of magic bullet, but it does make surethat at least the overall proportions will somewhere near. 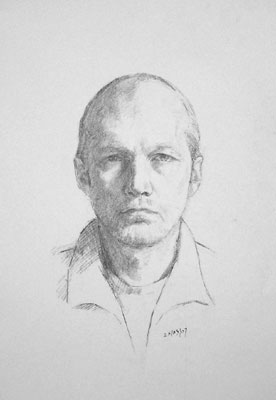 This last one was done in March, and is by far the best of the three. By this time, I was getting more confidentwith the Loomis head sketches, and I think it shows in this drawing. It would be a tad disappointing if the practicewith the Loomis heads didn’t make at least some difference to the drawings, having done at least a hundred of thoselittle sketches now.

This is probably the best likeness I’ve got of myself yet, although Michelle reckons I’ve made myself looka touch younger than I really am in this one. The cheek of it! Nothing wrong with a bit of wishful thinking I say.Maybe the drawing will age and I’llbecome increasingly youthful looking in person as time goes on. Yeah, right.

But, quite apart from the likeness, this drawing has the most clearly realised form, even though I seem to havedrawn less, particularly on the light side. I think that’s the real valueof the Loomis approach – it gets you thinking about form in three dimensions. I remember when I started drawingagain a year and a half ago now, I concentrated a lot on trying to see my subject, whether it was my own head or apiece of fruit, as a collection of flat, abstract shapes. I hoped that this would help me to see the world asit really appears on the retina, circumnavigating my brain’s errant assumptions.

But, as I’ve continued working, I’ve come more and more to the conclusion that drawing and painting is not simplyabout producing as faithful a reproduction as we can of the images which hit our retinas. What we’re trying to do,it seems to me, is to create a believable illusion of an object out there in the real world, to create a sense of depthand of form. I’m no longer convinced that the best way to do this is simply to copy as accurately as possible whatwe see. That’s a big part of it, yes, and I do believe that it’s absolutely necessary to train our brains tointerpret what we see as accurately as possible. That’s why I do theBargue drawings and other accuracy basedexercises. But the limitations of the materials – a flat, two dimensional working surfacebeing the most obvious – make it necessary to find a way of translating what we see into an image that workson the paper. A more believable feeling of form may come from moving deliberately away from what we see.

Line in drawing is a good example of this I think. Outlines around forms are never clear outlines as we drawthem. They vary considerably, and often disappear altogether when the tone or colour of the background matches that ofthe object. That’s an important thing to be aware of in painting, and getting it right creates a more convincing impressionof three dimensionality of the forms. But drawing is slightly different from painting in that respect, and theboundaries of objects are often shown by a line where none exists in reality. The actual boundary ismore likely shown by a change in tone or colour, or both. But the line works, and makes sense to us in a drawing.

Of course, it’s also important to observe this lost and found quality of outline in drawing, but that’s not whatI’m getting at. If you look at Ingres’ portrait drawings, a lot of the forms are shown entirely with line. Verybeautifully controlled, modulated line, yes, but nonetheless, line where there was none in the subject. Drawingseems to me to be more of an abstraction than painting is in this respect. But I think that it points out a basictruth of drawing and painting, that if we simply copy what we see, even if we’re skilled enough to do it veryaccurately, we won’t create as convincing an illusion of three dimensional reality as we will if we allowourselves a bit of leeway with what we put down.

Of course, all of the above ignores the fact that painting and drawing are, or at least should be, muchmore than just a transcription of what we see or the creation of a convincing illusion form and depth. To my mind, a good piece of work should convey some feeling,should be something more than just a transcription or a demonstration of skill. Anyone who’s ever been movedby a painting or a drawing will know what I mean, although I don’t have the words to express it clearly.

But for me, at this stage, I’m putting expression to the back of my mind. These drawings are just exercises,nothing more, not really portraits in any meaningful sense. They’re not attempts to convey any kind of feeling.I’m lucky if I can get them symmetrical enough not to make myself look deformed. If I want to see real expression in aself portrait, I can go to the National Gallery and look atthis painting,which I have done many times, as ithappens.

That’s expression. I’m moved every time I see that painting, there’s real sadness in that face, it’s aface that’s lived. That’s primarily what makes it such a good painting in my view.

But equally, I don’t believe that trying to achieve what Rembrandt did with that self portrait without a firmgrounding in skill is advisable, or even possible. Art colleges, and the prevailing view of the art world, would have you believeotherwise, of course. For all I know, you might agree that depth of feeling is so much more important than skillthat any kind of training is a waste of time. It doesn’t matter whether you can draw or not, all that matters isthe sincerity of your feeling. In fact, the skill and knowledgeacquired through years of training and practice is actually counterproductive. Whatmatters is the artist’s soul, the authenticity of feeling, the message. Unfortunately, it no longer seems tomatter whether anyone but the artist knows what the message is. Art has forgotten how to communicate.

That Rembrandt painting has a very clear message. If you don’t agree with me, go an have a look at it and tell meyou’re not moved by it. It would be pretty sad for you if you weren’t, you’d have to be pretty much devoid of all humanfeeling. I see the same thing in that paintingthat thousands of other visitors to National Gallery see, because the painting communicates a feeling andit does so clearly and unequivocally.

How did I get started on this? I can’t remember now. Getting back to my own drawings, I’m pretty happy if I manageto produce a self portrait drawing that looks at least vaguely like me, is reasonably in proportion, and doesn’tmake me look like I go around scowling all the time. Going by that yardstick, I’m pretty happy with the last oneof this batch of drawings.

I do think that practicing with the Loomis approach is starting to produce better drawings. Firstly, the proportionsare better. It surprised me to find that my face is actually fairly symmetrical, much more so than I usually draw it.Loomis showed me that. When I keep one eye on the symmetry, and don’t let it wander too far, thedrawing benefits and looks more lifelike. Loomis’s division of the central line of the face, with equal distancebetween the hairline, brow, nose and chin does seem to work pretty well in the real world. And the emphasis onfeeling the form as existing in three dimensions does seem to be having an effect. Lately I’ve been drawing sometransparent Loomis heads, drawing in the ear and jaw line on the side of the head I can’t see. I’ll try to getthem posted soon, since I think they’re helping me to feel the form of the head more completely. I think it’squite a useful exercise I think.