Having been blessed with a series of overcast days last week (which means no direct sunlight coming through the window in the afternoon) I’ve had the opportunity to move on somewhat with the tone studies.

For this batch I’ve been adding the odd real object to supplement the cubes and spheres. It’s been illuminating. 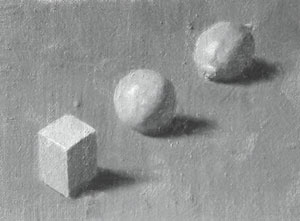 One of the problems I’ll have when I come to relate this practice with cubes to real worldpaintings will be correctly judging the tones, specifically the local value, of real world objects. So I’ve started adding them now.

Having judged this lemon to be a local value of 7 (ish), I painted it along with my cube and sphere. I think this was a good exercise.

The cube becomes a cipher for the tonal balance of the lemon, showing the values in clearly defined planes. The sphere gives an opportunity to play with modelling of soft edges and some reflected light. When it comes to painting the object, the lemon in this case, it’s largely a case of refining the cube and sphere.

It strikes me that this is conceptually very like a Bargue approach, but with tone. The cube is the first tone schematic and the sphere a further refinement before moving on to the final piece. Each stage is a preparation for the next. When I get to the lemon, I don’t have to think about what values I need, since I’ve already worked them out on the cube. The numbered Munsell neutral palette lets me pick up what I need and get right into painting, my colours (or values) are mixed and ready. All I have to think about is the modelling and handling of the paint. 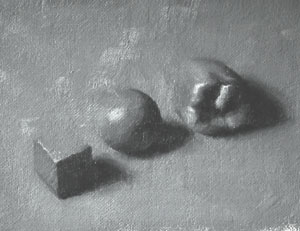 Here’s another in the same vein. This time I judged the value of the green pepper to be a 4.

This is interesting to me. Although I’ve only been working on these studies for a short time, I’m beginning to home in quickly on tonal mistakes in my older paintings. A little over a year ago I painted a red pepper.

I thought that was one of the better sketches at the time, but looking at it now I’m struck by the many tonal mistakes. I see how light I’ve done the shadow plane on the skin of the pepper. It’s way too light, especially in comparison with the shadows around the stalk. The shadow plane of the stalk itself is also much too dark, completely out of relationship with the light and shadow planes of the wooden shelf the pepper is sitting on. Which are also wrong.

In this tone study, I can’t differentiate between the shadow plane of the pepper and the shadows around the stalk. This new pepper, although it’s grey, has more life and more physicality to me than the red one of April last year. I’m considerably encouraged by that. I’ll be doing some more of these. 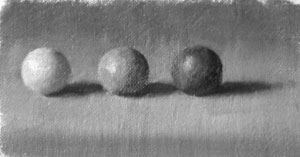 Next up is a simple study of spheres. These are values 8, 5 and 3. Although I know that there’s three Munsellsteps between each, it looks more like two here. But I could add a white or a black sphere to this study without upsetting the balance of the tones, I have enough of my range left I think.

It was beginning to sink in at this point how important the relationship between the shadow plane of an object and it’s cast shadow is. The more of these studies I do, the more I begin to see how important the values of the shadow planes as a whole are. I’ve been spending most of my energy on the lights up until now. But there seems to be a pattern developing in these studies, which is echoed by the way I build up each study:

The first thing to go in is the overall value of the cloth. Then the cast shadows of the objects. At this point, the balance of tones, the light environment of the painting, is established. Everything that comes after this point will need to be judged in relation to these two main values.

Now it remains only to add the light and half tone planes. As long as they fit with the existing relationships, a convincing impression of light should come into the picture. The painting can still be very crude at this point, just rough, hard edged blocks of tone, but if the relationships hold water then the light will work. I must do some studies to play with this, someone remind me when I’m next at the easel. 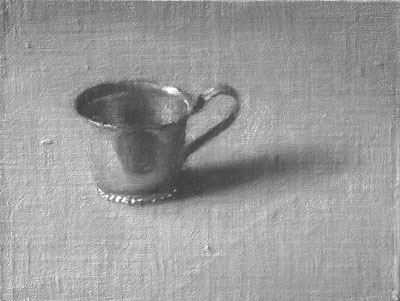 I’m fond of painting silver. This study was a test to see if what I’d learned so far about tonal relationships in a painting would translate to something tonally more difficult like this.

The complication with very reflective objects is two-fold I think. Firstly, the highlights reflect more light than the light plane of a white cube, so they’re even further out of the available range of paint on a flat plane. Secondly, the shadow planes tend to reflect whatever is around them, throwing off the value.

But everything still has to relate to that basic relationship of the main background value and the cast shadow. This study convinced me even more that it’s the shadow planes and the background that really matter, more than the lights perhaps. I ignored the limitations of the paint for once, and just tried to get the relationships of the shadow planes right, leaving the lights to take care of themselves. And oddly enough they did. Somehow my eye is tricked into seeing the highlight on the silver as lighter than it really is. Valuable lesson learned. Coming soon: silver cup and white sphere. 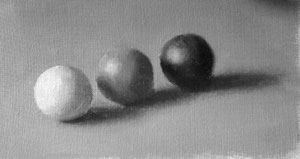 This last study is of my white, value 5 and black spheres. I had the relationships of the shadow planes to the cast shadows uppermost in my mind with this one.

Although I know that there’s much more to learn here, and many more studies to be done, I have the distinct impression that I’ve learned something very useful through this batch. The shadows are as important as the lights in defining the local value of an object.