Now the starters are out of the way, it’s time for the main course.

The original plan with these cubes and spheres was to paint each one in four different lighting conditions. Form light, the first, is three quarters in light, rim light is the opposite, three quarters in shadow. The other two are backlight, with all the object in shadow, and front light, with no shadows. Time will tell whether or not I get the whole lot done. I’m half way through the first batch now, here they are. Apologies for the slightly fuzzy pictures. 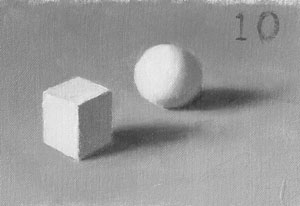 The first one, the white sphere. This is actually a nine-point-something in Munsell terms. This sphere seemsto have darkened a little as the paint dried, it’s only a little above a 9 now. All the same, I used white for the light planes, meaning there’s no room left for highlights. It’s the opposite of the way I’d usually paint something white. 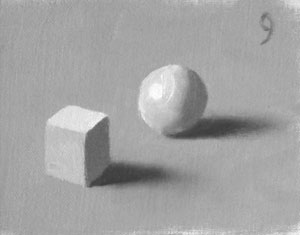 Although I know that in reality, there’s a whole step in Munsell terms between each of these cubes and spheres, I can’t hit that full range with paint. So I need to compress as I go down, trying to move down by less than a whole step each time. Some of these were done on different days though, and the light was a bit different. I’m not convinced that makes a difference to the relationships though. 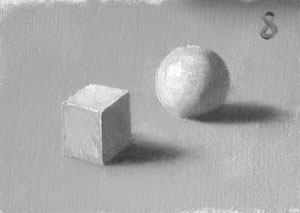 About this point I started changing the way I paint these studies.

I’m not using any medium for a change, just neat paint as it comes out of the tube. The current order is background first, scrubbed in thin with a bright.

Working in a shadow box lined with dark cloth, I have little or no reflected light on the cubes. It appears to me that some reflected light from the cloth bounces up to the underside of the spheres, but that comes in at the end. I’m thinking about theform principle as I do this, trying to deal only with the big shapes. Of course, there’s not a lot of detail on a cube and sphere in the first place.

The light planes I’ve started putting in with thick impasto, using the brush like a trowel. As well as making it possible to build up the edges and get sharp edges where they’re warranted, it gives the light planes a physicality that doesn’t come across in a photo. It makes the shadows look softer and and more convincingI think. This goes back to something I read about Howard Pyle’s teaching in “Creative Illustration”. Texture belongs to the light, not to the shadow. So I’m doing the minimum of modelling and blending on the light planes, letting the texture of the paint do most of the work for me. 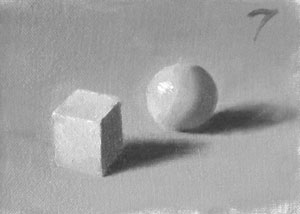 I should admit that I’m not worrying about the accuracy of the drawing or the modelling very much. The tones should be enough to carry it, if the relationships are right. It’s interesting, too, to see how little you can get away with.

These studies are taking me back to the Harold Speed elementary tone exercise, and are built up in much the same way. In may ways, I’m relearning what I learned about the compression of tones in that exercise and the red and blue still life exercises. In reality, the cast shadows are darker than I’m painting them here. I need to leave some room in the darks for when I get to the value 3, 2 and 1 cubes. That also means pushing up the tones of the shadow planes of the cubes and spheres a touch. In short, I’m not painting what I see, I’m painting what I know I can hit with paint.

So for these studies, I’m not using my tags at all. Although I could work them all out with the tags, as I was at the beginning of these studies, I’d struggle then if I tried to paint a dark and light object together in a painting. I think that this is a probably a better real world solution. 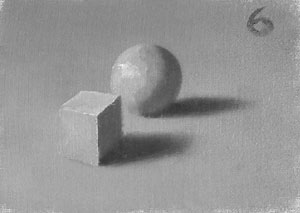 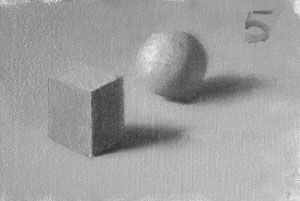 With the value five cube I’ve hit the same value in the shadow plane and the cast shadow. This cube and sphere are (about) the same local value as the cloth. That should be about right. For the last four of this batch, the objects will be a darker tone than the cloth.

That means I’ve got to fit four steps in between 3 (the cast shadow) and 0.5 (the black that I’ll be using for the shadow plane of the black cube). 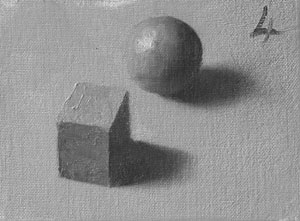 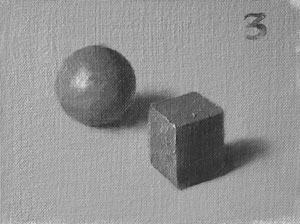 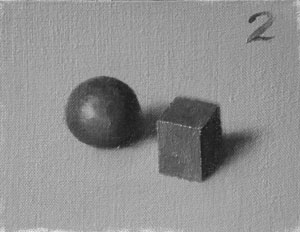 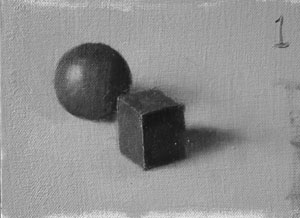 With the first batch of ten studies of the objects in form light, I’m a quarter of the way through. Although I have a nagging feeling that I should have spent more time trying to get the relationships between the tones exactly right, and that I should have spent more time observing the spheres more carefully, I do think I’ve gained a lot from this exercise. Perhaps the strongest lesson I’ve taken from it is the importance of the relationship between the shadow plane of an object and its cast shadow. These two can define the difference in local value between the object and the surface it’s sitting on, and must work correctly with the relationships between the light planes.

I’ve started to apply paint differently as this series has progressed. I’m not using any medium now, just paint straight from the tube,and working on canvas panels. The backgrounds and shadow areas are laid in as thinly and evenly as possible. Anything goes in the lights. In some of these studies the paint has been piled onto the light planes pretty thickly. It’s probably not a good thing, but it’s fun and it makes them stand out. It almost feels like sculpting the plane out of paint.