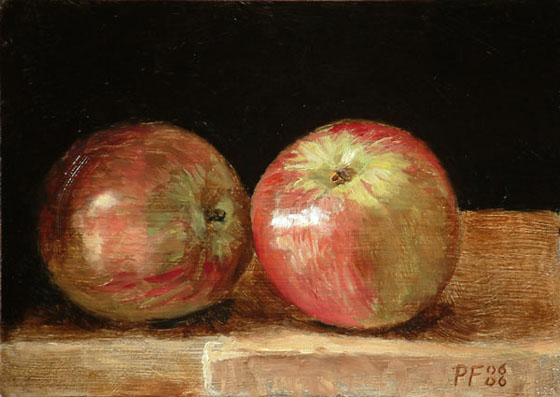 Number three of the ten pairs of objects series.

Set up and method for this one were the same as the last two.The progress shots should make it pretty obvious how I’ve goteverything laid out. Again I’m working sight size, and I’mcontinuing with the technique of laying in the shadows first, drawingthe painting out with tone, and then applying opaque colour to theareas in full light.

With this one though, I laid in the shadows with brown, a mixtureof burnt sienna and ultramarine. In the last painting, theGarlic and Peach,I drew out the painting with grey, which meant I had to colour allthe shadows afterwards even though they were mostly brown. So doingthem brown today to start with seemed like a good idea to savetime and work. It’s very easy to overwork a painting, to fiddleand fiddle until the life gets fiddled out of it. Putting in theshadows in brown meant less fiddling.

I know I said in the write up of the Garlic and Peachthat I was going to mix thebrown, but I copped out and used it straight from the tube, purelyfor the sake of speed. I’m always against the light and time isnecessarily limited so it would seem like obstinacy to makemyself mix the colour for the underpainting. Ofcourse this meant adding a colour to my limited palette – burntsienna, so now I have a six colour palette, seven when I’m paintingsomething very bright red, alizarin won’t do it and I have touse cadmium red.

I also said I was going to use burnt umber. I used a mixture ofburnt sienna and ultramarine because that’s whatJulian Merrow-Smithuses, he described a little of his techniqueon his blog, where he mentions using a mixture of burnt sienna andultramarine for underpainting and shadows. Julian’s paintings are stunning, hiswork is an endless source of inspiration for me. It’s like poetry whathe does with light. In the case ofthis painting, burnt sienna and ultramarine were ideal for the shadowsand I could mix up colours very close to what I was seeing, going eitherwarmer or cooler depending on what I could see. Apart fromon the apples themselves of course, where I dragged some colourinto the thin, sticky paint and medium mix. Oh, I used Roberson’smaroger again today, I seem to be reaching for it by default. 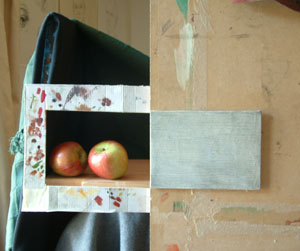 Here I am ready for the off. I’m working on an acrylic gessoed MDF panel again, whichI’m finding to be a really nice surface to paint on, especially with thebrush strokes from the gesso giving it a bit of texture. The paintseems to sit on top of it rather than sink into it like it can with canvas.The canvas can leech the oil out of the paint and leave chalky looking mattareas on the finished painting, not nice.

I’ve constructed my usual jerry-rigged light box by leaning a shelf upagainst the still life set up, and covered it with a dark green throw whichis pulled round behind the apples and pinned to give the dark background.The apple on the left is mostly in shadow, with full light falling on theone on the right. I want to catch this in the painting. 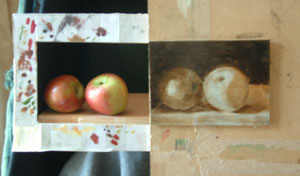 Under painting is done. All I’ve done here is paint the shadow, thisisn’t a strict tonal version of what I can see. On the apple on the right, evenon the area in full light the tone is still quite dark because of the dark redcolour. I think this is what they mean when you read about ‘local colour’in ‘how to paint’ books. But I haven’t added that tone because it’s not a shadow,and I don’t want this translucent glazed effect on any of painting that’sin full light. When I come to add colour to the apple, the next stage, I’llbe matching the colour as close as I can to what I see, and the tonethere will take care of itself then. 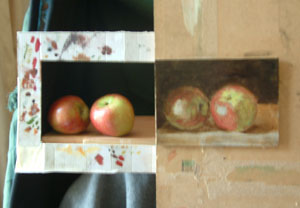 Speaking of which, here it is. The first of the opaque paint for theareas in full light is going on.

Unfortunately this photo is very blurred, but I was quite exited at thispoint since I could see the effect that the warm brown shadows werehaving, I was getting the idea that this painting was going to be animprovement on the last one, and I wanted to get on. I really couldn’t bebothered with messing about with the tripod, thus the camera shake. Atthis stage, I’ve also started dragging some colour into the shadows. I’vetried to do this as thinly as possible, so I don’t lose the translucency andcan still see the ground through the paint. The paint on the areas with lightfalling on them is thicker, none of the ground is showing through, except on thehighlights which I’ve left blank for filling later. 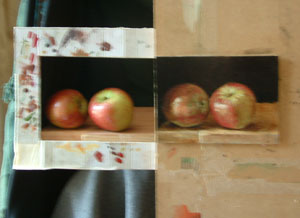 Here we are a bit further on. Again the photo is very blurred, but from acombination of this shot and the final pic it should be possible to see how it’sprogressing.

The dark background has been laid in with a mixture of alizarin andpthalocyanine green,my version of black, and the opaque paint for the wood, just theareas in light, is going on. Once this was done it became obvious that the shadowson the wood were basically done, and would just need a bit of retouching hereand there. I’ve struggled a bit with the cast shadows on the wooden shelflately, so it was nice to see that already they were working better than theyhad previously, and I’d barely touched them.

This painting took four hours. That’s very quick for me. I got an earlystart with this one because now we’re getting into summer there’s more sunlight,which gets into my room at about half two in the afternoon. When that happens,if I haven’t finished painting, all the colours, all the shadows and tones,change completely as the sun creeps across the still life set up and I’m basicallyscrewed. Everything I’ve painted will be wrong. The forecast for today was sunnyso I knew I was going to have problems

Everybody’s been moaning aboutwhat a grim, wet summer we’ve been having so far, I think I must be the only onewho’s happy about it. On overcast days the light stays constant for prettymuch the whole day and I don’t have to worry about sun stopping play. As ithappened the day became overcast just about the time the sun was due to comethrough the window. All the same, today I started painting at eight to be sureI could get the painting finished before there was any danger of the sunintruding.

Because I’m concentrating so much on the light, it’s very important to methat it doesn’t change too much whilst I’m painting. The best light comes fromnorth facing windows, because the sun will never get directly onto the windowand the light stays constant throughout the day. The baroque Dutch painters,masters of light, used to set up their studios in houses on streets which raneast to west so that one side of the house would have north facing windows.

How this kind of knowledge became lost to the current art education establishmentI don’t know, but I suspect that it got lost, along with so much else, when modernart became more about self-expression than producing a faithful representation ofwhat we see. Much of the information about how the old masters worked is out thereon the web or in books and can be found with some digging, but as someone who’s spent sometime in art education, I find it sad that nothing like this was ever mentioned,let alone a part of the curriculum.I remember classes painting from life when the model would simply be placed underthe dodgy fluorescent lights already fitted in the old classrooms, sometimes flickeringconstantly like fluorescents at the end of their life have a habit of doing. No wonder sofew painters these days can match the old masters for rendering of light.

Anyway, back to the painting. I’m happy with my two little apples. I think I’vegot closer than I have so far to a convincing feeling of the light, of the reality ofthose two little braeburns sitting on a bit of wood next to the window in my backbedroom, and that’s all I want. Laying out the painting through placing glazed shadowsin warm brown, cooling into black with more ultramarine, really helped me put thispainting together. There’s no doubt in my mind now that painting translucent shadowsand using opaque paint for light is giving me a stronger feeling of light. This willbecome a permanent fixture for the rest of this series, and most probably beyond.