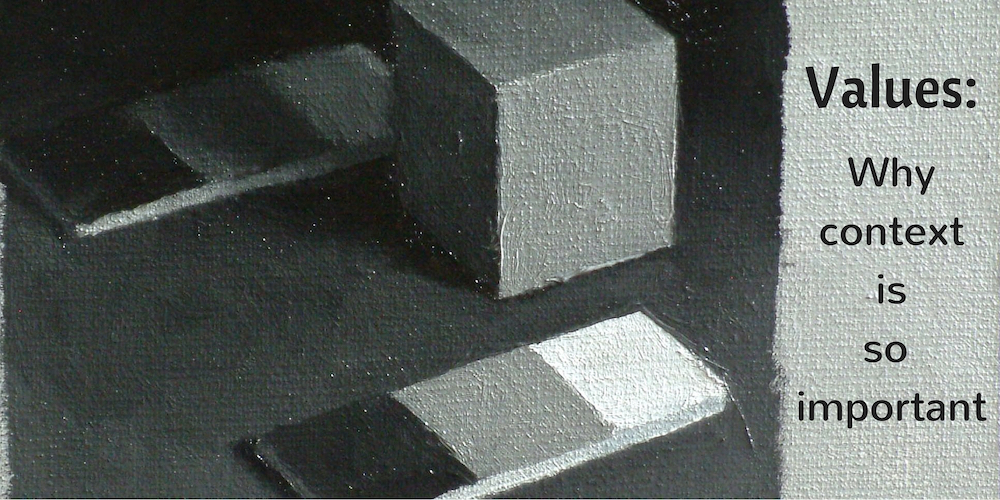 If you’ve been painting for any length of time, you know that it’s extremely difficult to judge values accurately.

But values are so important.

Poor values kill the realism of a picture more than anything else. More than drawing, more than colour. You can’t paint a convincing red pear or lemon or rose – or anything, actually – if you can’t get the values right.

If it were just a case of matching values, it would be simpler, but it’s not. When you’re trying to judge a value, and trying decide what value you should use in a specific part of your picture, you have to bear in mind the context.

The two meanings of context

Our perception of a value is affected by two things:

This is really a perceptual problem. The best demonstration I’ve seen of this is an excellent animation that artist and teacher Anthony Waichulis shared a little while ago on Facebook. Notice how your perception of the value of the circle changes as it moves across the background – but in fact, the value doesn’t change:

2. The context of the value in the scene

This is really a psychological thing, I first came across it on the excellent section on value perception on the handprint site. What value we expect to see in a part of a picture depends very much on where we “read” that value in the scene. Have a look at this little value study I did recently: 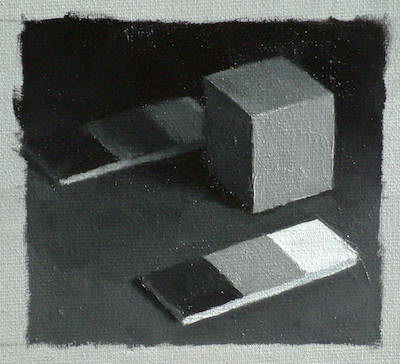 Notice the two strips with three values painted on them, black, middle and white. For the white square on the little strip at the front, I used my lightest light to paint it – titanium white.

For the strip at the back, the white square is in shadow. There’s less light back there, since it’s towards the back of a shadow box. There’s also a cast shadow from the grey cube falling over it. So the value I painted there is much darker. Here’s a comparison of the two values in isolation:

First, the value of the white square on the strip at the front:

Now value of the white square on the strip at the back:

Quite a difference! But they both read as white in the painting. We “know” the block at the back is the same local value as the one in front because of a few visual cues that help us read the scene. We see the cube, so we know the value strip at the back is in shadow. We also see that the two strips, the one at the front and the one at the back are the same.

We can actually play a little with this, in a way that shows very clearly how much our perception of the scene affects the value back there. Let’s say we paint that strip at the back white too: 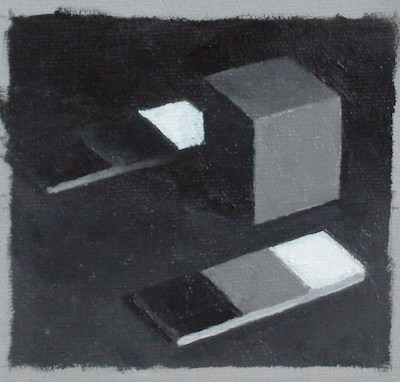 That block now doesn’t just appear too light to read properly in the picture. It positively appears to glow. Even on a photo of the study, this works. The value of the white square at the back is the same value as the white square at the front, both are painted with titanium white – but it looks lighter. Because we know psychologically that there’s no way that the square at the back could be that value unless it was actually emitting light. So our brains make up a story for us that works: the square is glowing.

Note that this isn’t simply a case of the value being affected by the values around it, because the surrounding values are roughly the same in both cases.

Imagine if I’d taken the time to paint it as if it was glowing, with a little halo, and if I’d put another surface next to it with reflected light bouncing off. It really would appear to glow. Hm. Maybe I’ll try that in another little study 🙂

How to cope with the problem of context

How to cope? Get the relationships right.

I don’t mean to be facetious. That’s the only way I know to produce convincing values. When you’re trying to judge values in a picture, just as when you’re trying to draw something accurately (yes, I know Anthony but I can’t think of a better word!) what matters more than anything is that you reproduce the relationships you see.

What that means for values, is that if a given value is lighter than a value in another part of the scene, you must reproduce that relationship.

But even this is bendy and ambiguous.

Because you don’t have to accurately reproduce those relationships. For hundreds of years, painters have made perfectly good pictures by deliberately manipulating the values they see for effect.

There’s a catch though: Even when those values are manipulated, the manipulation of the relationships has to be consistent. If it isn’t, you’ll likely end up with one value lighter or darker than another, when it should be the opposite. That will destroy the scene. Or perhaps make something look like it’s glowing!

However you approach this problem, it appears to me that the most important skill to develop is that of comparing. Is this value lighter or darker than that one over there? By how much?

One way is by using an isolator – a little piece of card with a hole cut in it, that allows you to isolate the value you’re looking at from the surrounding values. But there’s lot’s of potential there for throwing yourself off track with that. Because the tendency is to match the value you see, perceptually. the little isolator will only really be useful if you use it to judge whether the value you’re looking at is lighter or darker than another, somewhere else in the scene.

In this little value study, I deliberately set up a value range that I knew I couldn’t match with paint. Because I’ve got black local value in complete shadow (absence of light) with a white local in full light (the light block on the value strip at the front of the painting) this scene is beyond the range of values I can hit with paint.

The study, step by step

Here’s a few photos that show how I put this study together. First, the set up. I’m using a rough-and ready version of sight-size. 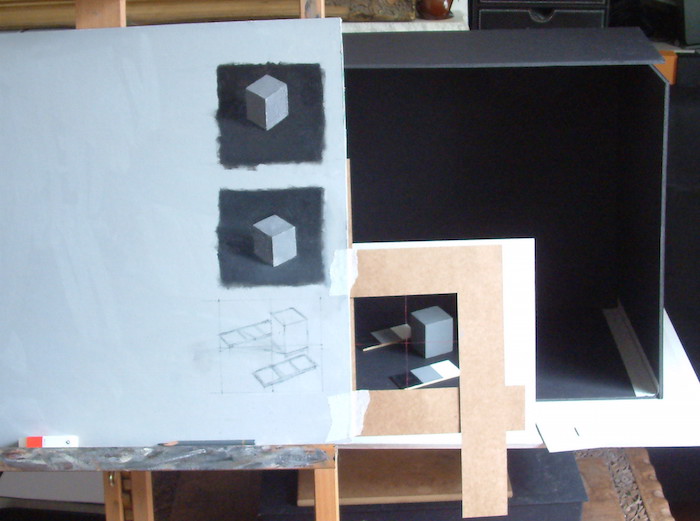 I’m also using Munsell value chips to judge the values in the scene, using a little isolator as I described above. But I have to be careful to bear in mind that I won’t be able to match all these values. I need to think in relationships, not absolutes. 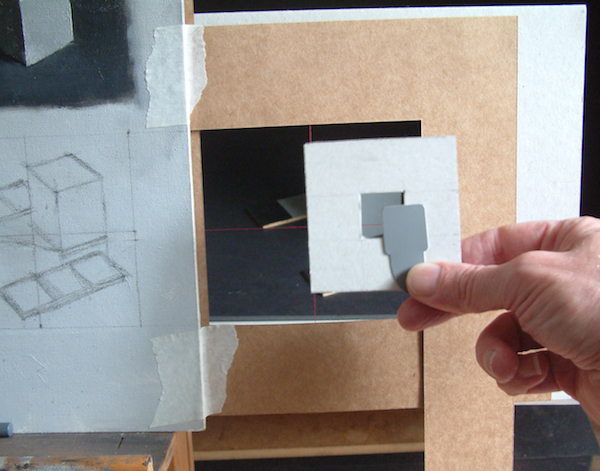 Here’s the study near the beginning. I’ve started by laying in the lightest light and the darkest dark, to establish the range. It’s what happens between these two extremes that will decide whether or not I manage to create a convincing illusion of reality! 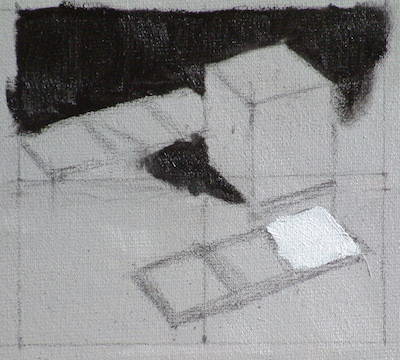 If I was just estimating that value, without consciously and carefully comparing it to other values in the scene, I’d get it wrong. I’d paint it too light. The study would be a less convincing illusion of reality. 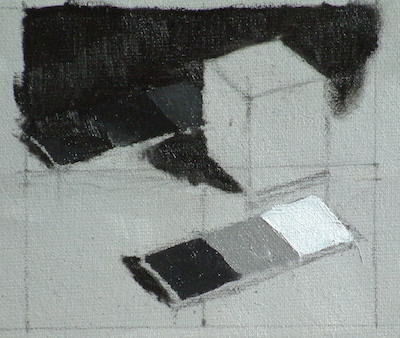 And here’s the finished study again. That white block at the back is starting to read much more like white now, because the cues are there, we know from looking at the scene that it has a shadow cast on it. We expect it to be dark. So we “know” that it’s white.

What can we learn from this?

There have been some fairly difficult concepts in this post (for me too!) and if you’ve managed to read this far then you have my thanks – and my admiration 🙂 I certainly don’t pretend to have answers to all of the difficult questions we come up against when trying to assess values when we’re at the easel. And maybe there are no hard and fast answers, just more and less useful answers.

But at least it helps to frame the problem, and to understand why these things can present us with such difficulties when we’re in the thick of it.

I plan to produce some more of these little cube studies to illustrate these ideas a little more clearly through pictures – much more effective than words when we’re thinking about values. The nice thing about making those little studies is that each one will help me develop my own skill with value a little further. Ultimately, I think that’s one of the best ways to develop a skill: by isolating it and practising it repeatedly, from different angles.

I’ll be sure to post whatever I find here, along with the pictures.

P.S. If you find this kind of thinking about the problems we face in realistic painting and drawing helpful, I’d strongly encourage you to join Anthony Waichulis’s Visual Arts Curricula facebook group.