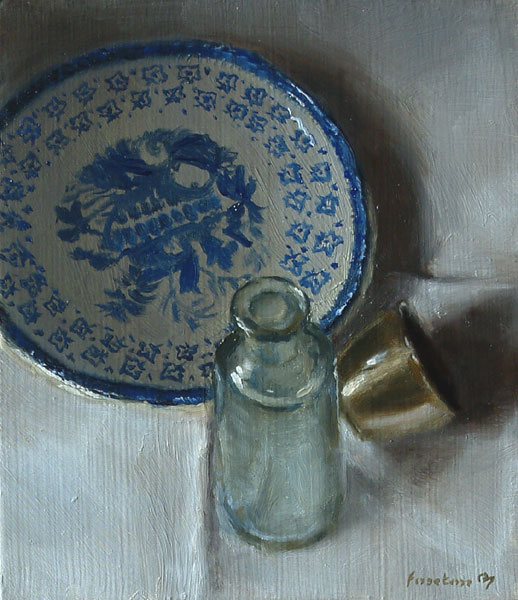 So here we are with the first painting of 2007. I’m now into the second year of my journey back to being a painter.

This painting is also a first since it’s the first time I’ve used professionally made Maroger medium. I stress professionally made, since I made my own from raw ingredients last summer and the results, whilst serviceable, didn’t compare to this version of the notorious Maroger.

Well, there’s a lot of controversy among painters about both the creator of the recipe, Jacques Maroger, and the medium itself.

Jacques Maroger was a painter and technical director of the Louvre for a while. I’m not going to give you a biography of him, there’s plenty of information about him on line for those interested enough to look it up.

Suffice to say that, in 1948, Maroger published a book called “The Secret Formulas and Techniques of the Old Masters.” This book purported to include recipes for mediums which old masters like Rubens, Rembrandt et al used to create their masterpieces. Fantastic, so all you had to do was get hold of these mediums and all your portraits would come out as good as Rembrandt’s portrait of Jan Six.

Except, of course, that they won’t. Materials do not a painter make.

The Controversy about Maroger Medium

And that has happened to some paintings in which it was used.

Unfortunately for the detractors of Maroger, though, there are plenty of paintings done with this medium that haven’t cracked, darkened and fallen apart to set alongside those that have.

I think the answer probably lies in the way the medium is used.

It appears to me that, as is usually the case, the truth lies somewhere between the salesman’s line and the detractors’ detractions. But let’s leave the experts to argue about all that, we’re much more interested in what it’s like to paint with, aren’t we?

One thing is for sure, no medium is a magic bullet. But my first experience of using this medium as it’s supposed to be used is that it’s an absolute dream to work with.

This particular variant comes packaged in two separate bottles. Bottle one is black oil (linseed oil cooked with added lead) and bottle two is mastic varnish. When they’re mixed together, they form an amber coloured gel.

It can be mixed with the paint either on the palette, or by picking up a little on the brush along with the paint, but the method I used was called, rather disparagingly, ‘painting into the soup’ by the impressionists, or more properly, the couch.

Painting into the Soup

First, a thin layer of the medium is applied to the painting, covering the surface of the support. The paint, having been mixed with a little more Maroger, is then applied as normal. It’s a wet into wet technique.

Apart from the nice consistency of the paint, the most noticeable effect is that the paint fairly glides over the surface, going much further than it would if it were applied onto a dry support. Possibilities for handling seem to be increased ten fold, and the strokes don’t move around or level off after they’re applied, they dry as they are.

I find that quite amazing considering how easily the brush glides over the painting. I think that may be what they mean when they say this stuff is “thixotropic”.

This particular painting was done over three sessions, with a couple of days drying between session one and session two. For the second session, I applied a second couch over the whole painting. For the third session, I just rubbed a little medium over the parts I was working on.

Using this medium is something of a departure for me, since I’ve been using a basic medium of a 50/50mix of pure gum turpentine and linseed oil for the last run of paintings. I like to simplify things, it makes it possible to address particular problems in oil painting, like say value, one at a time, without introducing so many variants at once that your mind loses focus.

But it’s not good to stand around in one place for too long, and I’ve decided that it’s time now to start investigating mediums again.

The wet into wet couch method suits me very well, since all my painting is done wet into wet at the moment, it’s a technique I like. I’ve been enjoying exploring the handling possibilities of thick juicy paint. Controlling the flow can be something of a challenge, but the results can be very satisfying. So this isn’t so much of a departure as a natural development of the way I was already working.

But enough of the technical stuff.

This painting is, for me, a further exploration of the special qualities of winter light, it’s soft mood.

The viewpoint is much steeper than usual, primarily because it gave me a chance to play with the composition in a different way than usual.

I had a dream of a composition very similar to this some weeks ago, and when I was playing around with my viewfinder looking for a start, the top down view immediately reminded me of the dream.

I’d like to explore the abstract, design qualities of composition more, and this painting is a tentative step in that direction. But more than anything, I wanted to translate that quality of the light this time of year.

It’s still all about the light. It’s interesting to contrast this largely monochrome, or at least very subtly coloured painting with another I did of this Wedgwood saucer some months ago, the clementine and saucer. It’s quite obvious how much the palette has changed, and how much more important value is now to the paintings. This painting is another example of the limited palette, being done entirely with burnt sienna, raw sienna and ultramarine blue.

The more I use these restricted colours, the more possibilities I find.

I’ve been busy the last few days preparing a bunch of panels and even one stretched canvas, ready for January’s onslaught. I have a lot of subjects already in mind, and I’m also planning to begin working up some of the studies into more complete paintings. Now that I’ve found a fertile furrow which I can plough for the foreseeable future, I plan to take some elements from the recent studies and push them as far as I can.

There’s something about the beginning of the new year which makes me want to return to the easel with renewed vigour and determination in 2007.

Fu. The time of darkness is past, the Winter solstice brings the victory of the light. It’s still bloody cold out, though.