I’ve been criticised for painting from photographs.

Once, someone asked in the comments to a post why I was copy-painting (his term) a perfectly good photograph.

Kind of ironic because it wasn’t a photograph at all, I was working from life. In fact, I never work from photographs. 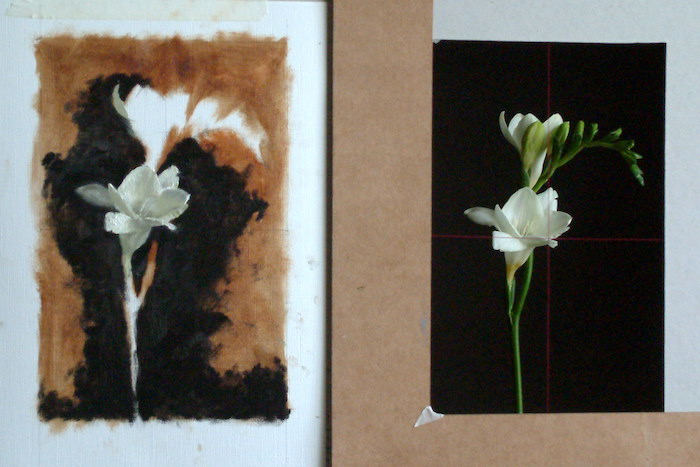 It’s a picture of the set-up I had for that painting. I still use a very similar set up for most of my paintings.

Just to clarify, here’s a wider shot showing the full set up: 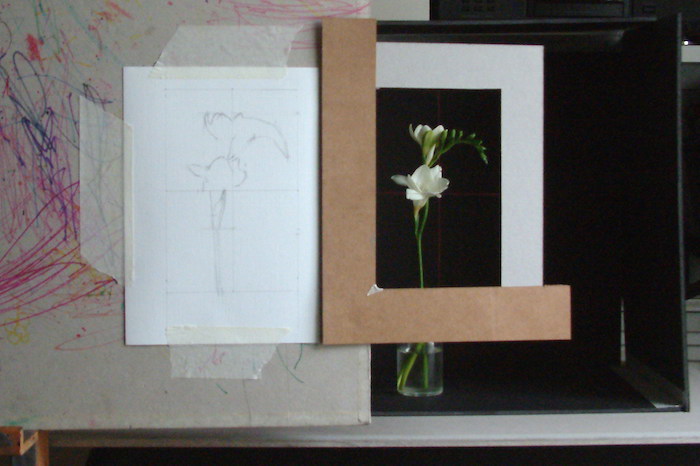 I guess you could be forgiven for thinking that the first picture was of a photo of the freesia set up next to the easel, that I was copying.

Because it does look quite flat, sitting in that frame. And it’s a photo of the set up, after all.

But the criticism is justified, you could argue, from the poster’s point of view.

The whole point of that set up is to flatten the subject, to enable me to see it two dimensionally, to make it easier to paint it onto a two dimensional surface.

I also generally paint with one eye closed, to keep my measurements more accurate and to further ease the difficult job of translating three dimensions into two. It also helps with working sight size, and making the one to one comparison between the subject and the work.

Is the grid cheating?

If none of those things are cheating (and personally I don’t think they are) then working from photos isn’t cheating either.

The only way we can see in three dimensions is to have two eyes, and I paint with one eye closed.

I’m not completely against or in favour of working from photos.

I’ve seen very accomplished work done from photo reference, enough to make it impossible for me to assert that working from photos is always a bad thing.

But I don’t think that in itself is enough to quell the objections – not all of mine, anyway. There’s more to this story. I think there are dangers inherent in it, which some artists are perfectly capable of avoiding. Usually, I find, they’re the more accomplished ones.

But some artists don’t seem to find it so easy to avoid them. In fact a lot more of don’t, especially beginning artists. And photography can have a negative influence, I think, both on the work and on the development of the artist.

Here’s why I think this is – and also why I think some of the most common arguments used against photography are mistaken.

Much of my objection to working from photographic reference has a philosophical root. Which kind of makes it hard to explain. But I’ll try.

Experience at one remove

It’s this: Our lives are increasingly mediated. Direct experience seems to be in short supply these days.

In fact the Internet and TV in general seem to me to be often used as mechanism for living life vicariously, at one remove, rather than experiencing anything directly.

But a more fully experienced life is very close to us, if we want it. It’s mostly a matter of paying attention.

Its door opens near. It’s a shrine
by the road, it’s a flower in the parking lot
of The Pentagon, it says, “Look around,
listen. Feel the air.” – Poetry, by William Stafford

Making art, to me, is about taking the time to experience things directly.

I want to experience the lemon I’m painting. I want to touch its surface, smell it, be sitting in the same light that is reflecting off its surface.

There’s just something different about it. I feel that there is, but I can’t explain to you rationally what it is. That’s part of what makes this subject so difficult.

When I paint a lemon, I’m trying to paint my visual impression, but also something else that I can quite put into words. If I try, I fail and the words I find look ridiculous to me. I laugh at them, myself.

I want to paint what I feel about the lemon, but how ridiculous does that sound? What can you really feel about a lemon?

I don’t know. All I can really say without sounding like a buffoon (hopefully) is that the experience of painting a lemon that’s physically in front of me, and painting a photograph of one is different. And making art for me is more about the experience of making it, the involvement in the process, than the end result. I lose interest in my paintings almost as soon as they’re finished.

All of the usual objections people have for working from photos – it’s cheating, its makes the image two dimensional, et etc – can be easily shot down (although the shooting down is not always accepted!) by rational argument I think. I won’t bother to go over them here because they’ve been done to death elsewhere, and will continue to be, no doubt.

But there are also very practical considerations that can make working from photos problematic. One in particular I think is the most important.

Cameras change the colour balance and especially the values of the subject. That’s especially noticeable when the values are outside the range of paint, which happens much more than you’d think.

A backlit screen will give a wider value range than a printed photo, that’s true, but it’s still much smaller than the value range we see in nature.

I think that if you’re learning, if the work you’re doing is about learning value say, then it’s a good idea to work from life. You have to learn yourself how to compress the values and I think that’s very good practice – much better than accepting the camera designer’s ideas about how value should be compressed.

What you learn from that experience will help you every time you paint, and it will also increase your expressive capabilities. If you can manipulate value, you have one more tool at your disposal when creating an image.

And if you then come to work from a photo, the knowledge you have about value will help you do a much better job of it, rather than copying the values you see exactly.

So if you’re doing a performance, if you’re making a piece of art, then I think it’s fine to work from photos. Doing so is a different process that working from life and the end result will likely be different, but that doesn’t mean better or worse. Just different.

But if you’re learning the basics, or if you’re doing studies specifically to improve your values or your colour in general, I think it’s better to work from life.

What!? They worked from photos!?

It surprised me to learn that some of my favourite painters worked from photos: The naturalists.

Dagnan Bouveret (a student of Gerome, who also used photos), Bastien Lepage, these kinds of painters often used photo reference in their work.

I find it a little ironic too, that those painters represented the academy in their day, and were in opposition, in many ways, to the impressionists. But they used photos. I wonder how many of the people that denigrate working from photos and use working from life as a badge of achievement know about that?

But I recognise that it’s just my choice, and other choices are perfectly valid for different reasons.

I do think that if you learn by working from photos, and you create your paintings from photos, and especially if you never work from life, your work will always bear the hallmark of photography.

If you’re fine with that, by all means go ahead. No one can tel you it’s wrong to do so (although they will, loudly and often). In my view, though, the artists who do the best job of working from photos are also just as capable of working from life.

At some point in the future I might. But I hope that if I do, the work I’ve done from life will inform what I make enough to avoid simply copying the photo. Because that, I really can’t see the point in.