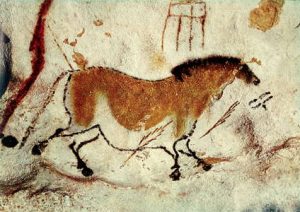 Mark making is one of the oldest forms of communication we have.

Drawing – of symbols – was the first way we communicated with each other across time and space.

Of course we have language, and the Internet now. Much more efficient.

Why do we still draw?

I don’t think there’s a simple answer to that question – or, I think that there are many answers.

Yours may be different from mine.

I run a members forum for drawing, what I call an art practice community, called Creative Triggers. The other day, one of our longest running members posted something on the members’ forum that I will never forget.

His name is Steve, and it’s his personal story of his three-year journey (so far) of learning to draw.

What follows is in Steve’s own words:

It’s now officially three years since I started art. And I mean art as in deliberately doing a quick sketch, a drawing, a painting, things along those lines. Art for art’s sake.

I hadn’t actually drawn anything for the sake of drawing since childhood.

Reasons for taking it up?

Whilst I still consider myself to be a ‘newbie’ in the art world I have just been looking through some of my recent pictures over the past few months, not just ‘finished’ artworks but even some practice pieces.

I can say for sure that had I seen these three years ago and been asked “Could you ever draw something like that?” then the answer would’ve been a “no” for the majority of them.

Interestingly, I think that had I been asked “Could you draw something like that given two hundred hours of practice?” then the answer would’ve most likely have been “maybe”.

The Power of Practice

So I think the difference there is that if presented with a challenge of spending what seems like a vast amount of time on one thing then it just sounds scary and implausible maybe. Whereas, the reality is somewhat different.

Taken step-by-step, not even hour-by-hour, but minute-by-minute – then it actually pans out as a far more realistic prospect.

As mentioned above, I didn’t consider myself to have any artistic talent before. To some extent I still feel the same, but I would say that I’ve gained a degree of artistic skill.

Well I’d agree in as much as you’ve really got to want it not just half want it. You’ve got to be prepared to challenge yourself constantly and also you need to be resilient against the plain fact that you will fail along the way. Failure (and then not giving up) has been essential in my progress. I’ve posted up plenty of “failures” so far

The single biggest change to me I’d say compared to three years ago is in observation. I notice so much more now – shapes, patterns, details, to some small extent colours. Features that wouldn’t have registered before I’m now noticing or actively looking out for.

This is that double-edged sword of course, as commented elsewhere, the better you get the more critical you get. So a drawing of my own that I may have previously felt quite proud over I’d now shudder at the cack-handedness of it.

But I’d rather it be this way because it means I can look at a few simple dirty lines penned by one of the Masters and appreciate to a greater degree what I’m actually seeing. I now see motion where previously was scribble, 3D form where previously was just a lighter or darker ‘bit’.

So that’s the last three years.

Whereas before I’d maybe have asked myself “do you really want to spend another three years at this art malarky?”, the question now would be more like “how much of this art malarky can I fit into the next thirty years, assuming I live long enough”.

It’s now embedded into who I am and would take several months of refusal to practice to lose it. I can’t think of any reason why that would ever happen. I bet if I’d had a Before/After brain scan there’d be a little developed synapse somewhere.

Why did this touch me so deeply?

Because it’s a story of persevering despite discomfort and difficulty, and that’s something we all have to do if we want to make art a meaningful part of our daily lives.

But more than that, it touched me because it’s a story of personal change and growth.

Steve’s ideas about why he draws have changed as he’s worked through the process of getting a regular drawing habit established and begun building his skills.

I’m sure he could never have envisioned this when he started.

To me, that’s the real meaning of drawing. It’s a way to become – an endless journey of becoming.

And in a very personal and meaningful way, Steve is Learning to See.

So I have one question for you today:

Why do you draw?