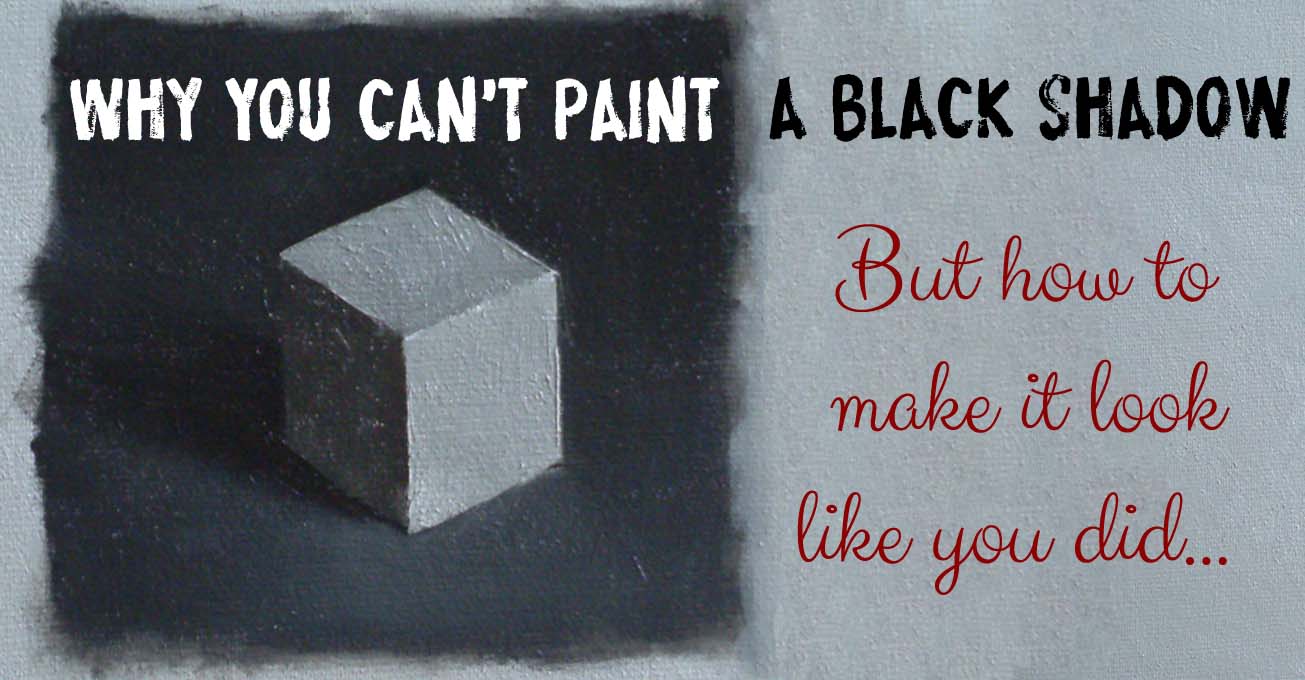 Have you ever tried to paint a shadow cast on a black surface?

Because you can’t do it. Well, you can, but you can’t match it accurately in paint.

“Nonsense”, I hear you cry, “It’s simply a case of using black paint! Ivory black will do it!”

Ah, not so, I’m afraid. Read this post to find out why.

I’ve recently returned to painting some little value studies. They might not make the most beautiful of paintings, but they do make very interesting subjects.

Why? Because I’ve learned more about value from painting simple little studies of cubes and spheres than I have from all the finished paintings I’ve ever done. Seriously.

Why do I say this? Well, here’s what good understanding of value gives you:

So what’s the best way to master value? Easy: Studies. By taking out all other considerations – colour, composition, technique, making a beautiful picture to impress your friends with, pretty much anything else – and focusing only on value, you can fast-track the rate at which you learn.

You still have to put in the hours, of course. But once you’ve done those hours, you’ll find that when you come back to trying to make a beautiful picture, or to paint something that looks real, your new knowledge will allow you to get much, much closer to your goal.

Why you can’t paint a black shadow

OK, so let’s get back to this black shadow, and why you can’t paint it.

Actually, it would probably more accurate to say, “why you can’t match it”.

Because you can paint it, but not by painting what you see.

Let me show you what I mean by example.

For the little value study I’m talking about today, I put a mid-grey cube (Munsell value 6, if you’re up on Munsell notation – slightly lighter than mid-value grey if not) in a black shadow box made from foam-core. The shadow box is useful because it controls the light. There’s very little reflected light bouncing around, and we can concentrate purely on the light falling on the subject.

In order to help with that focus, I often use a little viewfinder taped to the back of the board I’m painting on. The viewfinder has two big benefits:

Here’s a picture of the little study I painted, next to the subject as I saw it, through the little viewfinder. 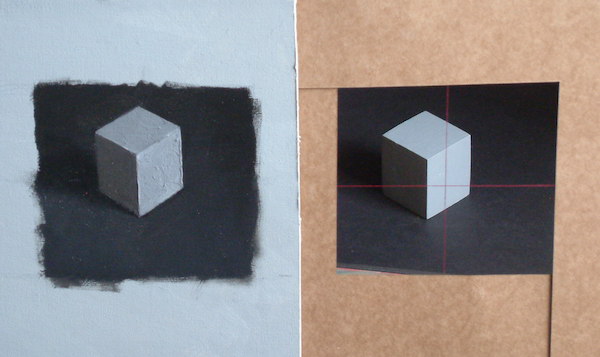 Why is this? I used ivory black for my darkest dark, and that’s as dark as paint gets.

The darks in my study are lighter because it’s painted on a flat surface and there is light falling on it. So some of that light is being reflected, making my black appear lighter to me, it actually looks like a dark grey.

So I can’t match it with black paint. My cast shadow will never appear as dark as the cast shadow in the subject. I physically can’t paint what I see.

That’s one reason why values are so hard to get right. The value range of paint is significantly more narrow than the range we see. That’s true even with indoor light like this. Unless you confine yourself to painting mid-value objects with mid value backgrounds, you can’t match the values you see.

What I did instead 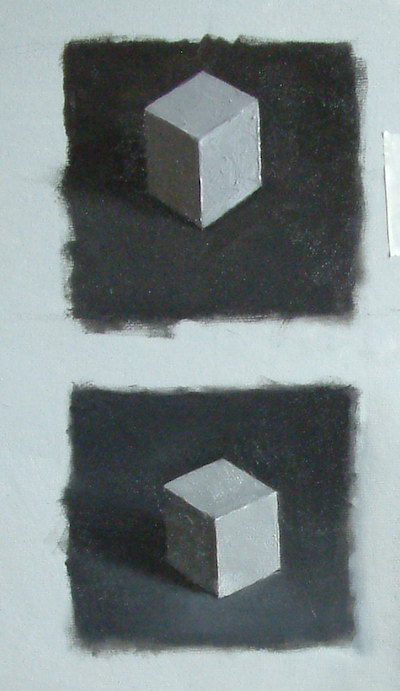 In the first study (the top one in the picture above) I painted the top of the cube and the side facing the light the actual values I could see. I matched them exactly. I also matched the ground in front of the cube. Since I can’t go as dark as the darkest darks on the subject, the range in my darks on my study is compressed.

As you can see from the first photo in this post, the cast shadow doesn’t really stand out from the background in the first study – nowhere near as much as it does on the subject. That’s what happens when you try to paint what you see – you run out of room in your value range.

Where the edges of different values meet, I’ve pushed the values a little to make them appear more different overall than they really are. That means that the value blocks in the study are less uniform. For example, the front face of the cube is lighter where the edge meets the shadow side.

I’ve also stressed the edges of some parts more, and blurred them elsewhere. Edge handling is a big subject and outside the scope of this post for now, but let me know in the comments if you’d like me to write in a little more detail about that.

The main difference between the first study and second one is that in the first one, I’ve tried to paint what I saw. In the second one, I accepted that I couldn’t paint exactly what I saw, and looked for ways to change the study so that the cube looked more real, even though that meant departing from a literal representation of the cube.

Here’s the second study along with the subject. In many ways it’s more different from the subject than the first study is. The light planes of the cube are pretty close to the subject. But the dark areas overall are lighter. It’s less accurate. But it’s a little more convincing as an illusion of form I think.

It took me a long time to realise this: Painting something so that it looks real isn’t the same thing as matching what you see, except in a very few cases when you have a narrow value range in your subject.

Useful things about value you can learn from studies like this:

Expect more of these little studies and the thoughts that go along with them over the coming months. I’ve got my cubes and my brushes out again, and I meant to use them – to learn (and hopefully share) even more about value.

I’m planning a few more of these studies over the coming months, and they’ll get more complicated and challenging as time goes on. For example, if I had a white surface in this study, I wouldn’t have been able to push the values of the top and from faces of the cube up without compressing lights – the same problem I had with the shadows, but at a different end of the scale. When you’re trying to paint a broad range of values, it gets really complicated really quickly.

For the next study, I’ll post a more detailed description of how you can make a shadow box and set up and paint little studies like this for yourself.

Please follow along. Try your own versions. If you’re serious about improving your handling of values, it’s the most useful thing could do.