How many times have you ripped up or thrown away a drawing that you thought was a failure?

I’m guessing lots of times. I know I have.

In fact, when you stop to think about it, you probably think you’ve made more failed drawings than good ones.

What the perception of failure does to you

Whether you think a drawing or a painting is a failure is largely a matter of perception. But there’s no getting away from the effect the feeling of having produced a failure has on you:

You can become demoralised. You doubt your ability. Perhaps you start to wonder if you really have it in you to be an artist.

It becomes that much harder to get started again. If you’re trying to practice your drawing regularly, it can break your practice habit and stop you making progress.

But there’s another way to look at these pieces that has the opposite effect, a positive effect.

If you can view the pieces you do from the beginning as just another part of your learning process, another step along your path, it becomes much easier to stay focused on improving, to let go and move on to the next one.

Of course, that’s easier said than done, I know. It’s not like you can change your approach to your work overnight.

For me, my approach to what I do has changed gradually over the years.

At the moment, although I draw every day, I don’t try to produce any finished pieces at all. I’m purely focused on practice, keeping my regular drawing practice habit going above all else. Funnily enough, some of what I produce now is more beautiful (in my humble opinion) than what I produced when I was trying to create beautiful, finished pieces.

Yes, lots of what I produce isn’t beautiful. Lots of it is throw away, just trying things out. Or even, on my most difficult days, just drawing so that I can say to myself that I turned up and did my practice.

If you struggle with seeing much of your work as failures, here’s a few ideas on how you might be able to start seeing them a little differently.

How to see your failures differently

I’ve produced many more drawings and paintings that I felt had failed than ones that I thought were successful. In fact, most of them could have been seen as failures in one way or another.

Here’s a drawing of my wife I posted on this blog, way back in 2006. As you can see, I was a little frustrated with the results. 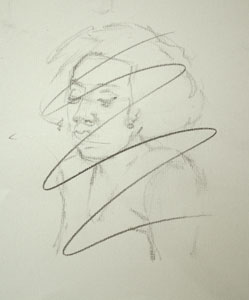 Here’s another, also from 2006, that I was so distressed about that I actually ripped it up. I had to stick it back together so that I could post it! 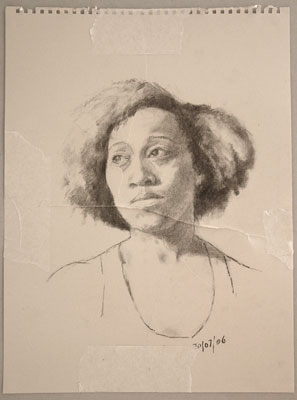 If you want to know what was going through my head at the time, you can read the original post here.

Reading that post back now, I can see that I had the beginnings of the right idea about how to approach practice. But still, it was as if I was trying to hold myself back until I reached a point when I could finally let go and wouldn’t have to that kind of practice any more.

Now, I’ve realised that that kind of practice is the whole point. I’ve also realised that constraint isn’t something you subject yourself to until you’re good enough not to need it. It’s a necessary approach. Constraint makes for continued progress, and, rather than stifling creativity, can enhance it.

Here’s another portrait of Michelle I did a few years later. Now, I could never have produced this without that failed one, and many, many drawings like it. I see lots of problems with this one, too. But they don’t bother me. They’re just sign posts for what I’d need to improve if I want to do a better portrait of Michelle. 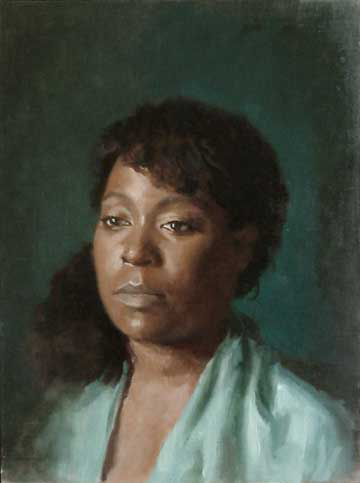 The irony is that without our failures, we won’t make progress and we won’t learn. So we need to be prepared for failure – for many failures.

Each and every one of your failed drawings has also been a success, because each one has moved you along a little and helped you progress.

That progress might be infinitesimally small, yes. But that’s why it’s so important to be drawing as regularly as you can.

So fail, and fail often, in the knowledge that those failures are really some of your greatest successes.

Just don’t allow them to stop you moving forward.

If you struggle with the idea of failure, I hope some of these thoughts help you.

I’d love to hear what strategies you might have that help you let go of the idea of failed pieces and embrace the learning process.