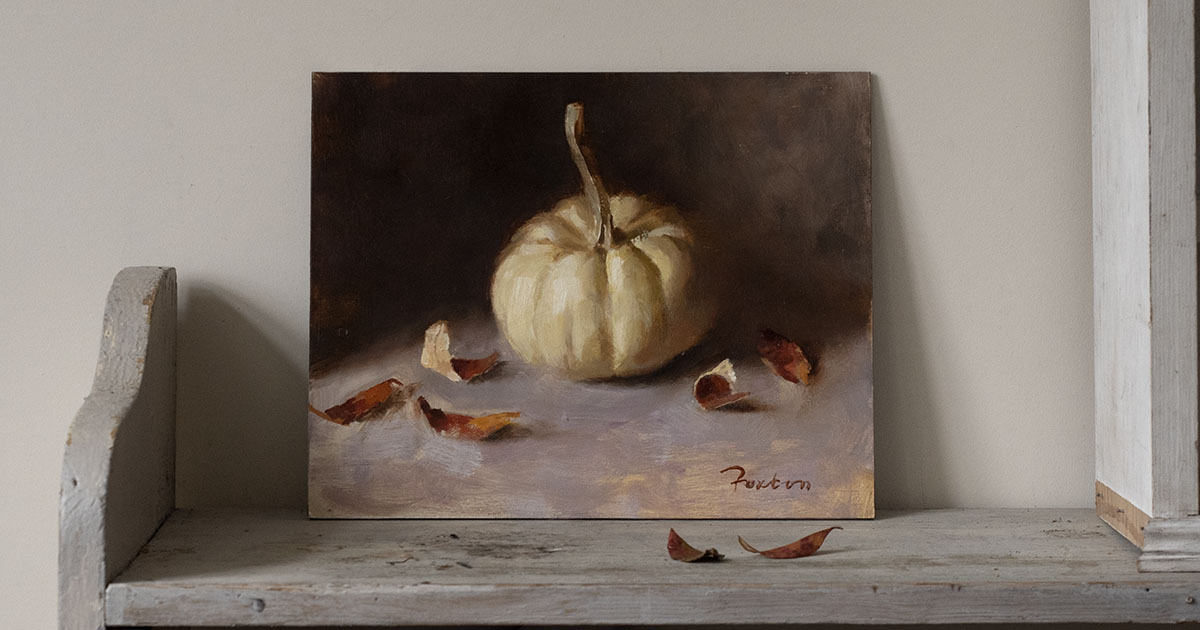 This painting is at auction until Thursday 23rd January, 2020.

Sometimes paintings can have unlikely starts.

This one started out as a demo on edge handling which I did as a live stream as part of our Threads artists’ community (if you’re interested, you can find out more about it here.

Somewhere along the way, a lot of the things I’ve been thinking about and working through lately came together in one piece.

It didn’t exactly paint itself, I couldn’t say that. But it did seem to flow in a way that my paintings don’t often do.

For a while now, I’ve been interested in more expressive brush-work. I’ll probably write about this soon, but I have a feeling that it correlates in some what with the way we see, taking in an overall impression gleaned from isolated areas of focus and then reconstructing the visual reality we “see” in our brains.

But also, I’ve been approaching values slightly differently, working much more with relationships.

Practically, that means constantly asking “is this value lighter or darker than that one? Which other values in hte scene are the same as this one”.

It also means making decisions about the overall value balance. At first I thought that was primarily concerned only with values, but lately I’ve been realising that it also affects the other aspects fo colour – most notably chroma.

In this painting, I wanted to keep higher chroma in the main, large shadow areas behind the squash.

If I let the value there go as low as it really was, I’d be down in the range of ivory black, the lowest value available to us in oils – which means I would have very little chroma and a slightly blue shadow.

What I wanted was chroma (if the word is unfamilairto you, you can think of chroma as intensity of colour, from very intense at one end of the scale to neutral grey at the other).

The only way to get that was to keep the values from going to their lower limit.

The original shadow was blocked in with transparent red oxide, painted directly into an oil/turps couch (a thin layer, in other words) which also gave it a visual effect of depth. But the hue was too red-orange.

Glazing over that with a low value yellow (raw umber with a little cad yellow) meant I could swing the hue closer to the actual hue of the shadow and still keep most of the chroma.

So the values in this piece are compressed deliberately, so that I could keep a little chroma at both ends, in the darks and the lights.

Personally, I believe that the best way to move forward with painting is to paint exercises. If they’re designed to teach you a particular thing, you can make progress which then autmatically comes out in your painting.

Here are some of the value studies I’ve been painting to practice working with value relationships: 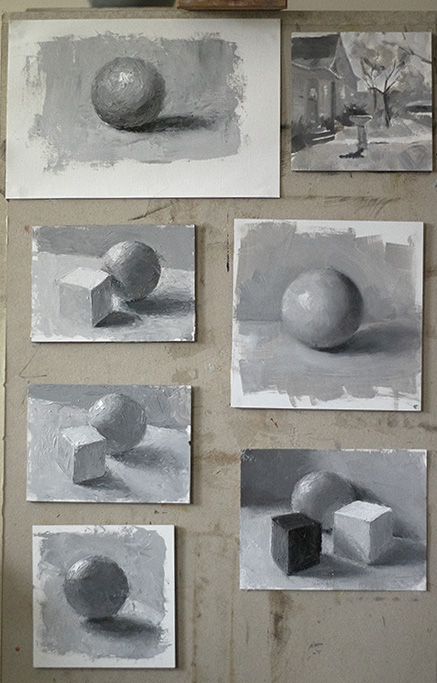 Although I didn’t feel that I was making a lot of progress when I was doing those studies, I do think that the paintings I’m doing now, which tend to be more liberal with the interpretation of the values, can only happen because of them.

So, perhaps if you’re feeling a bit stuck, or if there’s a particular aspect of your work you’d like to improve, why not try doing multiple small studies?

You might not feel like you’re making a lot of progress at the time, but then the next tme your’e at the easel and you want to perform instead of practice, you might flow a little more.

Watch this piece get painted!

I streamed the second session on this painting on facebook. There was also a little more in a third session to complete it which I didn’t record, but you can see the middle part of it here:

I hope this gives you someting to think about when you’re making your own colour decisions. Very often I think we have to compromise somewhere in our colour, even in an indoor still life.

We can’t hit the range we see in nature, because of the limitations of our two dimensional surface. Lately I’m finding i’m compromising the value range so that I lose less in the chroma.