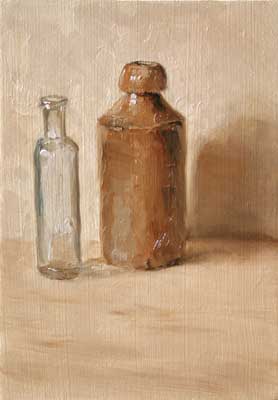 The unofficial title for this painting is ‘Wobbly Bottles’, on account of the appalling nature of the drawing.

But actually it doesn’t bother me at all that the forms are so all over the place. I kind of like it,and it suits theselittle bottles. That’s my excuse and I’m sticking to it. I’m sure oldCharley Bargue is tutting quietly tohimself and shaking his head sadly beyond the veil that separates this world from the next. I’m sorryChas, I’ll get back to copying your foot drawing soon to make up for it, I promise.

I got these two bottles from a collectors shop around the corner from me. The man overcharged me wickedly,I think I paid about £3 each for them. But they have a lot of character. He’s got a bunch more of them, and Iintend to clean him out, so lots of old bottle paintings will be appearing shortly I think.

Anyway, back to the painting. This is the first of my raw sienna/ultramarine/flake white studies which didn’tcome out as a greenish grey sludge. I’ve been finding the raw sienna/ultramarine mix more problematic to work withthan burnt sienna/ultramarine. With burnt sienna, I get a nice range of neutral greys, which I can take warmer orcooler as I like. It’s true that the burnt sienna is more reddish, and that can give a purplish cast to thegreys sometimes, but that bothers me less than the distinctly greenish cast I get with raw sienna. I haven’tposted the two failed attempts, despite my usual rule of posting everything, failed or no. Maybe I’m getting tooprecious. Maybe I should post them. But they’re disappearing into past history now, since they were done at thebeginning of December, and I’m no longer interested enough in them to bother photographing them.

I thought I’d give myself a bit of a challenge with this one too, by taking the objects out the half shadow Iusually like to put things in. A lot of my paintings recently have had a dark background, this one had a sheetof white paper as a background. I had to fight this painting, I think partly because it was outside of my usualapproach. But it’s good to throw yourself a curve ball sometimes I think, or things can get too repetitive. Iwas very unsure about this painting when I did it, and it’s not one of the stronger ones, but it has a placein my heart now anyway. I think because it’s so terribly drawn, but the bottles still have some vestige ofform and solidity. Both these bottles will be featuring in future studies. Hopefully next time they won’t bequite so wobbly though.