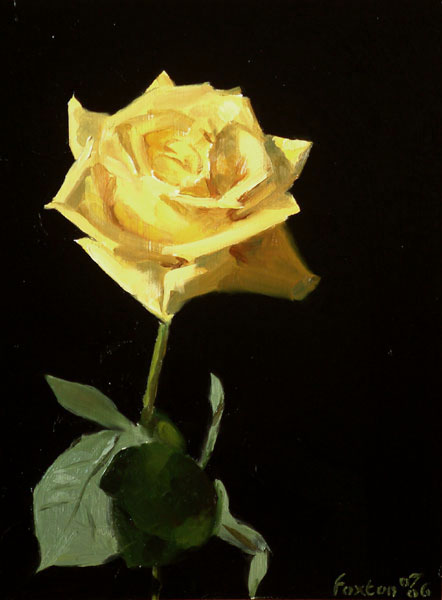 If at first you don’t succeed…

Two days ago I painted this sameyellow rose. I was disappointed with thepainting. It had none of the life of theGerbana Daisy, it had no light. I struggledwith the tones and colours and overworked the rose, it lost it’s life.

I knew I could do it better. Thankfully it didn’t wilt too much, so I had another go at it today.Having messed it up last time, I approached it much more carefully this time.

Firstly, I set it up further back from the window, so the light falling on it would be more gentle. Ithought I would have a better chance of catching softer light, since the colours on the rose wouldn’tglow so much. That also meant that I could have the same light falling on my panel as was falling onthe rose, which should make it easier to match the colours.

I also used the colour checker very differently today. Usually I put little dabs of the colour I’mmixing on the card, round the hole I’m looking through, to get a better idea of how close I’m getting.The problem with that is that unless you have exactly the same light falling on the card as is falling on thepanel (or canvas,) the colours will appear different. Too dark usually, since often the colour checker hasshadow on it. Either that or the panel has some shadow on it, making the colours appear too dark when they go ontothe painting. 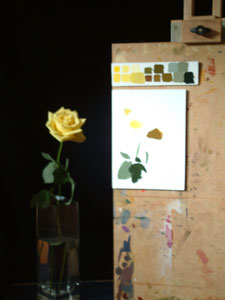 Here’s the painting near the start. I screened off all but the top foot or so of the window today,to further reduce the amount of light on the rose. I wanted to make really sure that I could get thelightest lights with the paint today. It also means that the light is falling in the classic’old master’ way for portraits – above and to the left. 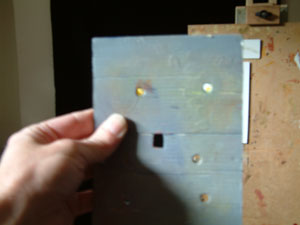 This shot shows how I was using the colour checker today. It became a much more efficient andreliable tool used like this. One hole shows the yellow of a particular area of the actual rose, whilst theother shows the colour I’m getting on the same part of the painting. It’s a bit awkward trying hold thecolour checker in one hand and the camera in the other, but this gives some idea of what I was doing.

The whole painting was done standing well back from the easel today, about eight feet. I walked over to theeasel when I wanted to put down a stroke, usually just a block of colour somewhere near where it should actuallygo. I ignored drawing out and form today, by and large. I was just concentrating on colour and tone.

I was amazed today at how much darker the colour notes I was laying down were than I thought they wouldbe without using the colour checker. This has happened to me time and again, so I take it that I musthave a strong tendency to assess colours and tones as being much lighter than they really are. Of course, this iscomplicated by working on a white ground, it throws all the colours off and makes them appear darker. Butwhile I was actually matching the colours I was isolating them with the colour checker, so it didn’t have aneffect then. 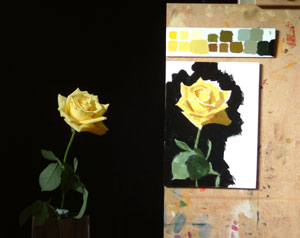 Here we are a bit further through. To get the painting to this point, all I’ve done is match colours,tones and shapes. I tried to avoid thinking about form today, beyond getting the colour notes somewherenear. The last time I painted this rose I got very wrapped up in the drawing and the form, and the paintingran way from me very quickly. I wanted to avoid that today. Ignore the differences in tone between theactual rose and the painting, the camera is being very misleading about the tones here. To be fair, my paintingwas a little light, and I had to darken some of the tones later, but I wasn’t this far out. I don’t think.

From here I just continued, adding and refining the colour notes until the rose was living on the panel, andit looked like more fiddling would just spoil the painting. The more careful approach I used today hascertainly resulted in a more convincing, more honest painting of this particular yellow rose, and has putthe frustration I felt at the end of the last painting to bed.

A lot of things contributed to this one coming out better. Firstly, being very careful withthe colour checker to make sure I wasn’t deceiving myself. I think the way I used it today is the bestway to use it, for indoor still lifes at least. Although I’ve been using it for a while, I think I reallycracked the best way of using it today. Also I was working much more carefully after the awful results from thepainting done on the 7th. And I was very careful about setting up the light today, cutting it right down tomake it more manageable. It seems a paradox, but by reducing the amount of daylight I was painting with, Iactually seem to have got more light into the painting. After the painting was finished, I got Michelleto stand where the rose had been and studied the light on her face. All the shadows stood out clearly,defining the forms of her head and features. I knew I’d be able to get all those colours and forms.

Immediately I started thinking about painting her portrait, but I think that would be rushing ahead.The point of me doing all these still lifes originally was to get some practice in on somethingsimple before I try to paint portraits, and it’s certainly working. Although I’m getting interested instill life for it’s own sake now, and don’t plan to stop. I enjoy trying to catch the beauty of small things.And they don’t move around or complain.